California is the center of the far left which takes the position that even undocumented aliens can hold a position in government, they support sanctuary cities, and of course, they are the major movement in the New Green Deal initiative. Berkeley, California banned natural gas which is a clean fuel requiring homes to be powered by solar and electricity, that is normally twice the cost of natural gas. Then they hired a guy to enforce it and gave him a salary of  $273,341 annually to start – plus pensions.

The state is mandating that beginning next year, every new home must be fitted with solar panels, raising the cost of a new home by at least $10,000. Higher home prices, higher electric bills, fewer choices are hoped to reduce population growth. The claimed logic behind the Berkeley ban maintains that they can help the planet and reduce carbon emissions by eliminating natural gas and switching to electric heating and cooking. This is erroneous since the electric grid is powered predominantly by fossil fuels. The state prides itself on having very little coal use, but it imports electricity from neighboring states like Utah and Arizona where it is generated by coal. The scam is to buy electricity from other states displacing the emissions from California and pretending they are a “Green” state, provided you do not look too close.

The environmentalists are now pushing 50 other cities to follow the lead of Berkley.  It’s no wonder families are fleeing the state, and that California is led only by New York in out-of-state-migration. The worst of all is who can migrate. During the Panic of 1893, President Grover Cleveland made a critical observation. Raising taxes hurts the average person for the “rich” can leave and export their wealth. The average wage-earner cannot export their labor. All the studies show that people who earn more than $1 million a year are much more likely to migrate than any other class. Even the Governor of New York Governor Andrew Cuomo has made the same observation and warned that raising taxes on the rich only results in their migration from the state. 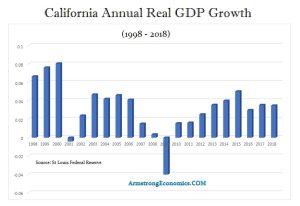 California’s economy looks like that of France or Germany whereby the peak in economic growth was 2000. We can also see that the last peak was 2015 perfectly in line with the Economic Confidence Model. The long-term projections for California are actually lining up with the European Union and this seems to imply that the adoption of such socialistic policies that ignore economics is detrimental long-term. Even CALPERS, California pension system for state employees, was directed to invest in “green” projects for political reasons and lost. They have been trying to cover-up their politically correct investment decisions.