I read with great interest your article on what Bill Gates is preparing for us. Rest assured he will fail 100000000%
Do you know why I am so sure?
It is very simple: I write from Europe and I know that there is a sport that is not your favourite but it is the VERY PASSION OF BILLIONS OF PEOPLE on this planet and that is soccer/ football. If anyone tries to kill this sport (as I understand by what Bill Gates is hinting at,” no mass gatherings”) he would be going against these several billions. Bill gates and all his supporters will be squashed before they have a chance to make any serious progress. I suspect that already all the political class in many countries is fully aware that they can’t hold the population at home for months on end.
People will come out and demand their soccer games and their basketball games and their rugby games and let’s see how Bill Gates and his supporters are going to stop them, NO CHANCE !!

Your great President, President Trump said just recently that he would like to see the Stadiums full again soon. He understands the people very well.

We live in a very connected world and there is no one who knows that better than you !! It is enough that several countries will not be able to stand up to the their populations and will allow mass gatherings for sports events and there you have it , a snow ball that will encircle the globe, snow ball that Bill Gates and his ilk will be impotent to stop.

I fully support you and everything you wrote in that article, really very important, but I am also seeing the confrontation these leftists loonies are going to have with people who will not think twice before rising up to have their games again or else …..

REPLY: I fully concur. Our models show that this is part of the cycle the computer has been forecasting the rise in civil unrest on the War Cycle and then we have the Revolutionary Cycle which was also due here in 2020. On top of that, I have been warning that the computer was showing that this 2020 presidential election would be the most violent since the 1960s. Still, add to that, the computer forecast that the Democratic Party may split.

There is certainly the youth who believe in Bernie and are pushing for an independent run. They have expressed deep resentment about the Democratic Party as being corrupt. They are unlikely to vote for Biden. He is not raising money for many see he lacks enthusiasm. The secret agenda has been to draft Hilary. We may see stiff resistance to that among the ranks. Then we have Cuomo from New York who keeps trying to grab the national microphone to get attention and many see he has been toying with a possible draft or at the very least a VP position.

Biden, instead, brought Michigan Gov. Gretchen Whitmer onto his newly launched podcast because he thinks he needs a woman running mate, regardless of her qualifications. This is what politics has come down to, gender and race. Nothing else matters because they assume the people are too stupid to know better. Women will just vote for a woman and blacks will vote for blacks. They assume we are all just superficial morons.

Bill Gates, in my opinion, has become a megalomaniac, which is a person who is obsessed with their own power. His views on reducing the population are clearly instilled in him from his father since childhood who was highly criticized as supporting abortion among minorities to reduce their number – hence a closet racist. This predetermined conclusion from his father made him quickly embrace the Global Warming for the threat was the world population growth which he took upon himself had to be stopped, like his father.

His vision of implanting chips in everyone is really so strange it is definitely reminiscent of the Nazi-Era – “Papers Please!” A lot of people are seeing him as the anti-Christ inserting the infamous 666 in people and without that, you will be prevented from buying or selling.

I think Gates is so off the track it is hard to even decide where to start a debate. There is nothing he proposes that I find reasonable and points to failed attempts throughout history. One of the earliest known references to paperwork that served in a role similar to that of a passport is found in the Hebrew Bible. Nehemiah 2:7–9, dating from approximately 450BC, states that Nehemiah, an official serving King Artaxerxes I of Persia, asked permission to travel to Judea; the king granted leave and gave him a letter “to the governors beyond the river” requesting safe passage for him as he traveled through their lands. 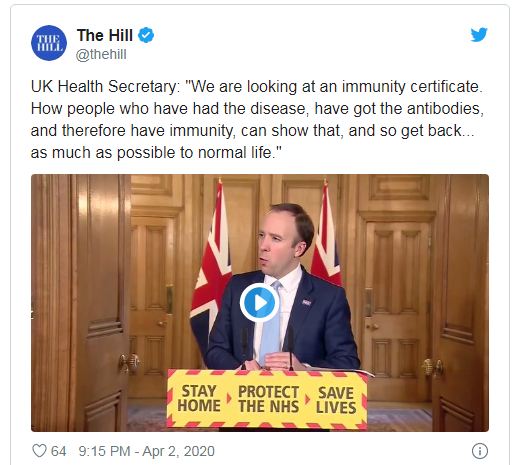 Already we have people in the government taking Bill Gates’ proposals that people be locked down without proof they are disease-free. This same idea is surfacing in some Baltic states. The idea of a passport was expanded to having documentation to travel within your own country. The Chinese bureaucracy as early as the Western Han, if not in the Qin Dynasty (221-206BC) required such details as age, height, and bodily features to be able to travel. These passports known as Zhuan determined a person’s ability to move throughout imperial counties and through points of control – Papers Please! Even children needed passports, but those of one year or less who were in their mother’s care might not have needed them.

Bill Gates will unleash civil war. You cannot suppress people in this manner. I think he is highly dangerous and a megalomaniac. His ideas of reducing the population were clearly installed during his childhood. I find it very disturbing that and he and Soros are trying to impose their ideas upon society by force.