First off, I would like to say it was truly a pleasure meeting you at the cocktail party this past weekend. Congratulations on presenting an incredible conference. It was my first time attending and I will definitely be there again next year. Furthermore, let me tell you that I was very impressed with your staff. They were very helpful before and during the conference. Lastly, I was extremely impressed with the number of young attendees that were at the conference. I consider myself as still being young, but the number of early 20 year olds that were at the conference was extremely impressive.

Now on to my questions. There seemed to be some confusion from a number of people that I spoke to as to the two November dates (the one coming up this month and the one next year). Can you please clarify the significance between the two dates and what you are expecting from them. Also, you may have mentioned this in the past, so I apologize for asking can you to repeat yourself, but can you tell me where the 23700 number came from on the Dow? Is it a number generated by Socrates or is it just a technical analysis number? Lastly, I would like to know what your thoughts are about the diverse crowd that attended your conference?

Once again, thank you for all that you have done for us little people.

P.S. I can’t wait for the release of the Socrates professional version.

ANSWER: The Economic Confidence Model has a turning point here this November 24/25. That can produce the temporary high. The next one November 21, 2018, is the one that tends to produce the major events that are often political in nature. For example, on the 1998 wave, we saw the Long Term Capital Management collapse as a result of the Russian collapse. Then the Pi Turning point produced the 911 attack on the World Trade Center to the day.

The next wave that peaked in 2007, produced April 16, 2010 and that was when Greece petitioned the IMF for a loan when it could not pay its debt. 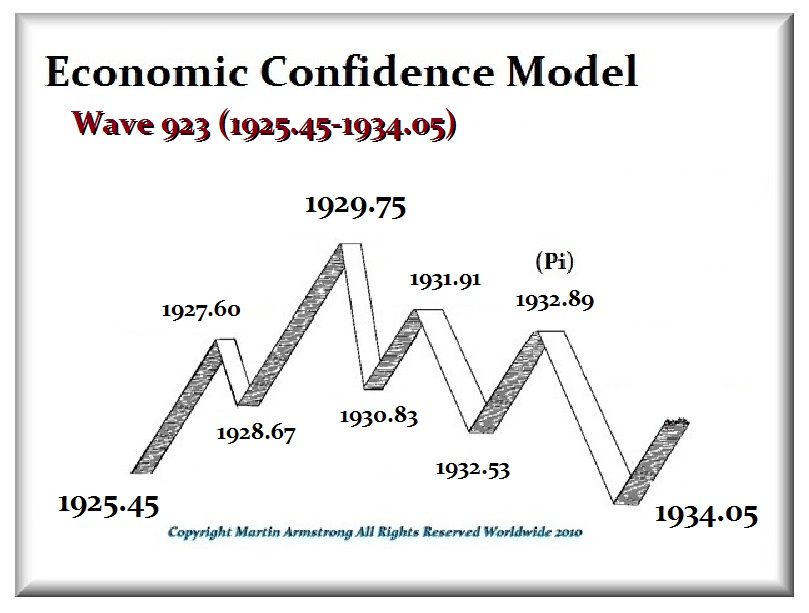 That same turning point from 1929 was November 20th, 1932. It was the 1932 German presidential elections were held on March 13th, 1932 (first round) and April 10th, 1932 (second round run-off) where the incumbent President, Paul von Hindenburg, won a second term. His opponent was Adolf Hitler of the Nazi Party (NSDAP). However, despite the fact that Hindenburg deeply distrusted Hitler and he ran to stop Hitler from winning, following his re-election, two successive federal elections left the Nazis as the largest party in the Reichstag. Hindenburg was forced to appoint Hitler as Chancellor of Germany in January 1933. It was December 1932 when the Fourth Encirclement Campaign was launched against Mao. The communist victory resulted in annihilating over 30,000 nationalist troops, including capturing more than ten thousand. Furthermore, the communist’s victory also armed them for they were able to capture tens thousands of guns from the nationalists.

Roosevelt ran in the primary elections in  1932 and became the candidate at the Democratic Convention  June 27 – July 2, 1932. The elections were November 1932. Then at the bottom of that wave in 1934.05, this is when Roosevelt confiscated gold.

On this wave, the Pi Turning point seemed to mark the political changes around the world from Hitler and Mao to FDR in the United States.