The Dow & the Economic Confidence Model 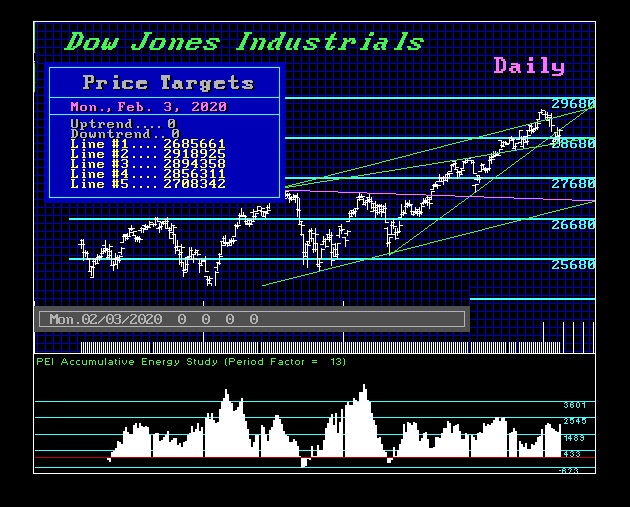 COMMENT: Marty, I have to laugh. Only those who have followed you more 20 years understand you have discovered the hidden order behind the facade. Fantastic call on this turn in the ECM. Once again to the very day in the Dow. And people do not think your model is real? They must be idiots who also worship Greta. 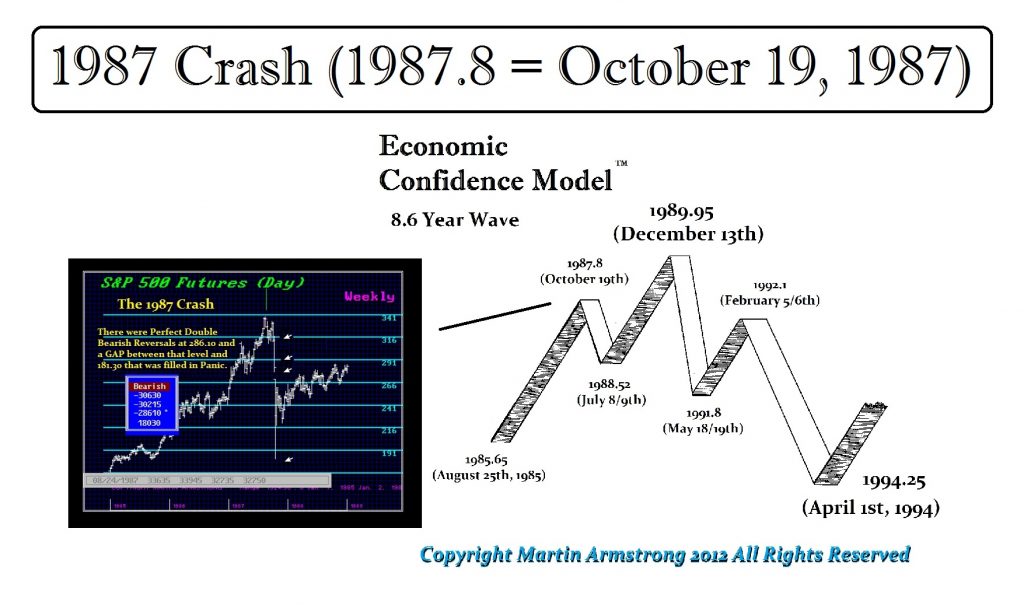 REPLY: I know. They cannot get their head around the fact that the Economic Confidence Model has pinpointed so many events in markets to geopolitical events to the very day. This proves BEYOND a shadow of a doubt that there is a hidden order behind the chaos.

The 1987 Crash and the new highs into 1989 along with the Japanese Bubble may be the most famous forecasts I have done with this model. But there have been so many others which have worked to the precise day in markets like this one here on January 18, 2020, to those that were within the same week generally as well as those regarding geopolitical events.

The 1998 forecast also landed me being named hedge fund manager of the year. I had sold the stock market the very day of the high on July 20th, 1998 and caught the ride down for the Long-Term Capital Management debacle. 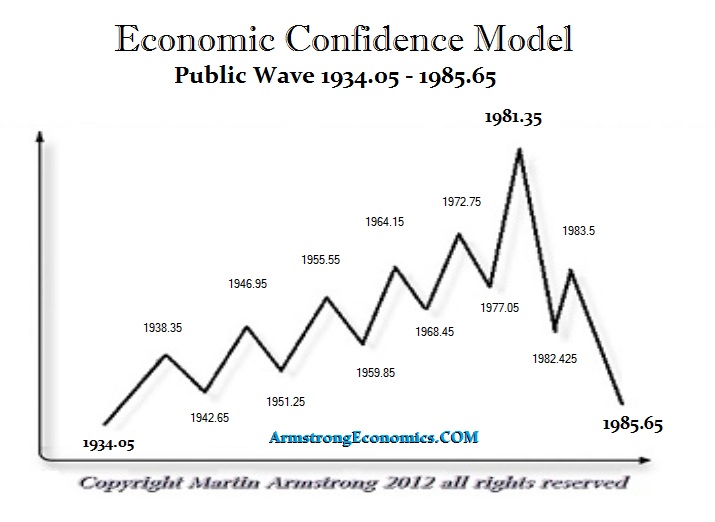 The forecasts that the Economic Confidence Model made back in 1981 and 1985 were also amazing. It was off 2 days for the peak in interest rates when the Federal Reserve raised the discount rate to 14% on May 5th going into the model major targeted of May 7th. That was also the peak of a major 51.6-year Private Wave – the first following the Great Depression which ended  1934.05 January 18, 1934. There is when on January 30, 1934, Franklin D. Roosevelt signed the Act he was pushing through concerning his controversial gold program transferring ownership of all monetary gold in the United States to the US Treasury and prohibited the Treasury and financial institutions from redeeming dollars for gold.

A year earlier, in 1933, Executive Order 6102 had made it a criminal offense for U.S. citizens to own or trade gold anywhere in the world, with exceptions for some jewelry and collector’s coins. Frederick B. Campbell was actually convicted under the Executive Order 6102 for hoarding gold when he tried to withdraw 5,000 troy ounces of gold he had at Chase National Bank. Gus Farber, a jewelry merchant, was also arrested with 12 others for illegally selling $20 gold coins without a license. Then there was the Baraban family which was arrested for operating a gold scrap business under a false license. Roosevelt even confiscated gold held by foreign companies including Swiss banks with offices in the United States. The Supreme Court narrowly upheld the law on very questionable grounds in Perry v. US, US v. Bankers Trust Co., Norman v. Baltimore & Ohio R. Co., and Nortz v. US.

The Economic Confidence Model even picked on the Pi turning point the negotiations to hand Hong Kong back to China when the principle was approved and the drafts where then agreed by September 18th, 1984. At the bottom of this wave, on August 21st, Japan agreed to join the G5 which became known as the Plaza Accord on August 21, 1985, when the target was Sunday, August 25th. The public announcement came on September 22nd, 1985. We even took the back cover of the Economist Magazine for three weeks in July 1985 to announce that the bottom of the cycle of deflation was reached and that a new wave of inflation was about to begin. 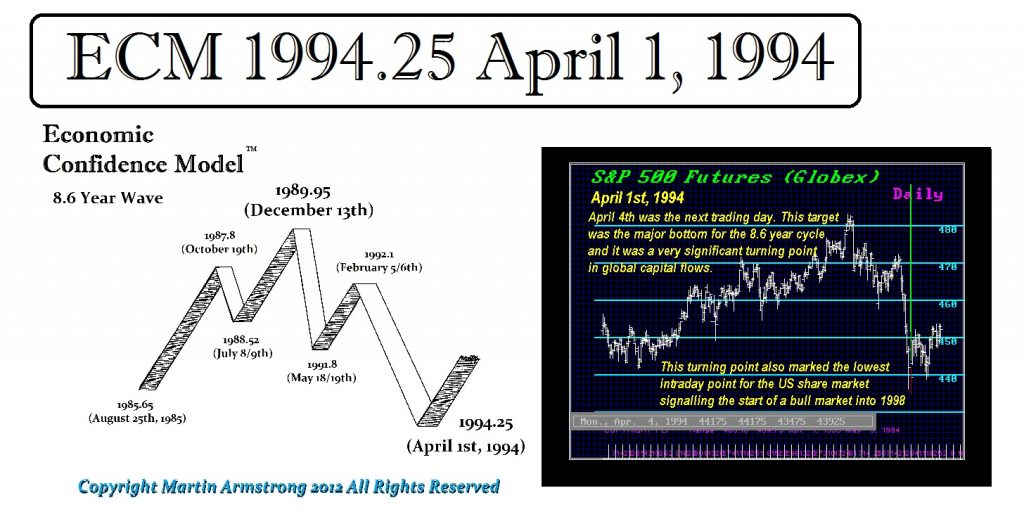 While 1989.95 peak of the wave had picked the top in the Japanese Bubble Economy and share market, the precise day of the low in the stock market in the USA came on the bottom of that wave on April 1, 1994. 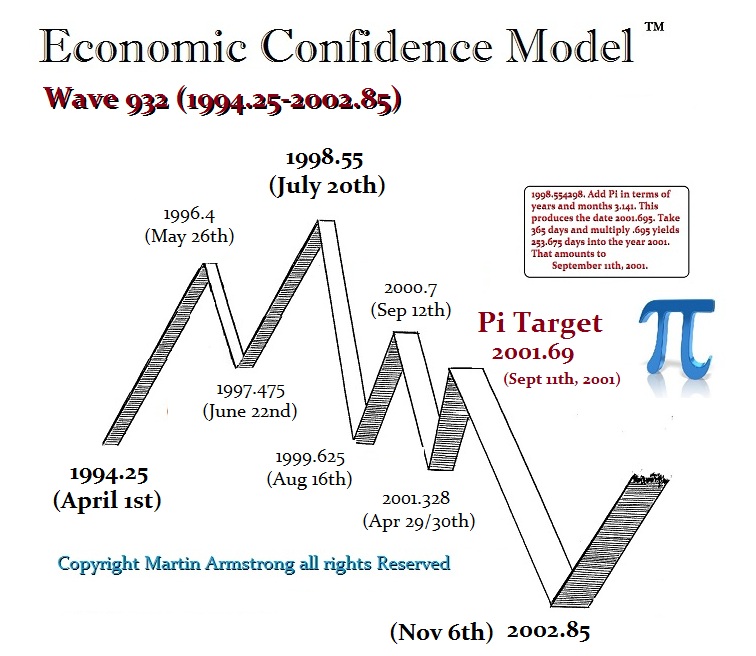 The capital flowed out of Japan and into South East Asia which then culminated in the Asian Currency Crisis in July 1997. The Panic low in the Thailand share market actually took place on June 19th, 1997 3 days before the target 1997.45. The Thai market turned down again and bottomed on September 4th, 1998. As for the currency, the Thai Baht collapsed on capital outflows and it finally bottomed on January 12th, 1998. It was actually June 17th, 1997 which was a Tuesday that marked the peak in the Baht against the US dollar 3 days before the turning point 1997.475 which was that weekend. This was the same position on the wave as the 1987 Crash which was also currency related. 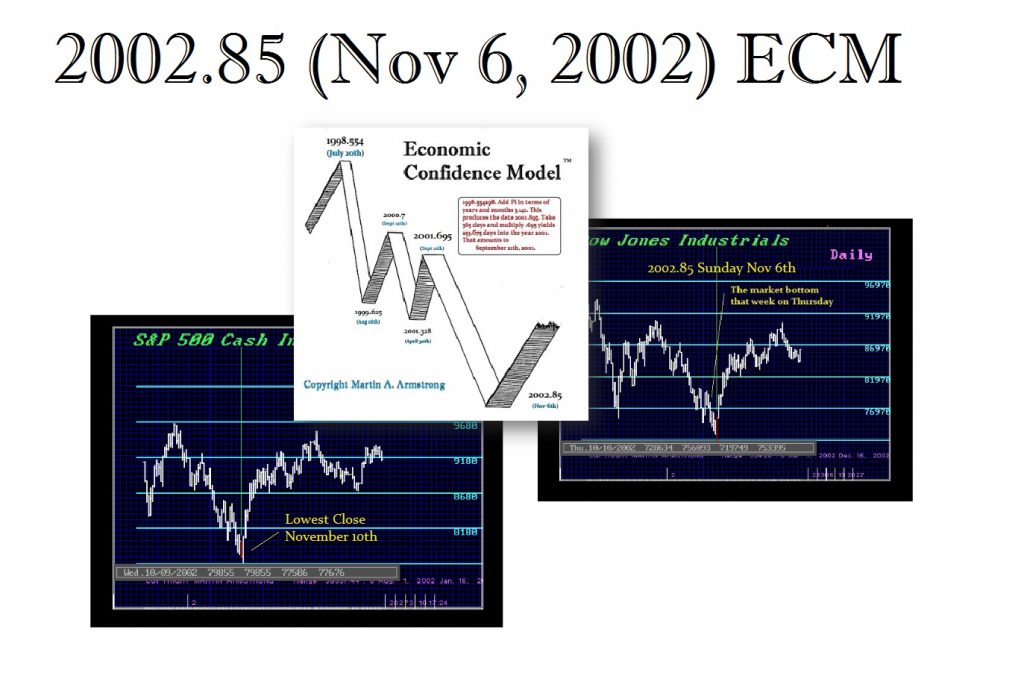 After that wave marked the precise day of the high in the S&P500 on July 20th, 1998, the Pi turning point picked precisely the day of the 911 attack, which of course handed power to the government and the excuse to spy on every phone call. Then the bottom of the wave was to be Sunday, November 6th, 2002, and the market bottomed the next week. But 1998 to 2002 market something more important. This was the transition in creating the Euro which began in 1998 and ended in 2002 with the actual printing of the Euro. The euro officially came into existence on January 1st, 1999. The banknotes of the euro entered circulation with the first series (also called ES1) which was issued in 2002. 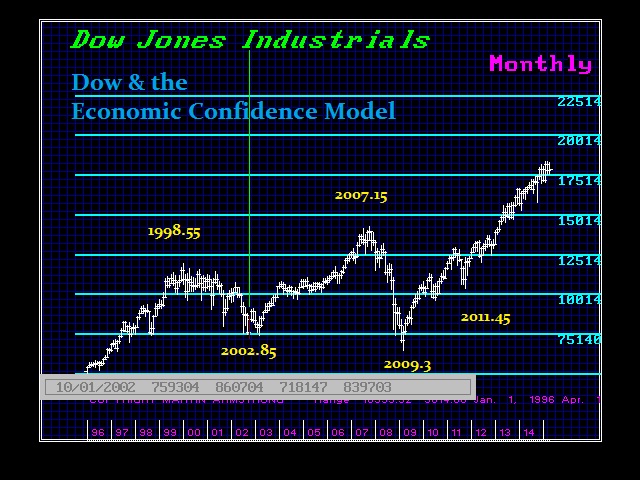 The wave which peaked in 2007.15 picked the precise day of the high in the Schiller Real Estate Index. It was also the precise day that Goldman Sachs sold its notorious real estate CDO for which they were charged fraud. The Pi target marked the precise day Greece applied for the IMF loan beginning the whole European debt crisis. The 2009 low came on the half-cycle 2.15 years later and the 2011.45 turning point saw the formation of the high in gold and the breakout in the stock market.

The top of this wave 2015.75 marked the start of Merkel opening the gates to the European refugees which have been the downfall of Europe. It marked the very day that Russian troops entered Syria. We now have the temporary high in the US stock market at the bottom of this wave.

Sure, no matter what evidence I put forward, there will be people who refuse to believe anything. We need those type of people for that are what make the cycle work. We all also have our personal life-cycle where we grow in experience and knowledge. We begin life ignorant and those who are smart, actually learn from their mistakes. As we proceed through life, we change and adapt so in the early stages of life we buy the high and sell the low. Those of us who are actually intelligent and are capable of learning from our mistakes, mature and then we become the people who sell the high to the novice and buy when they panic and sell everything at the low. 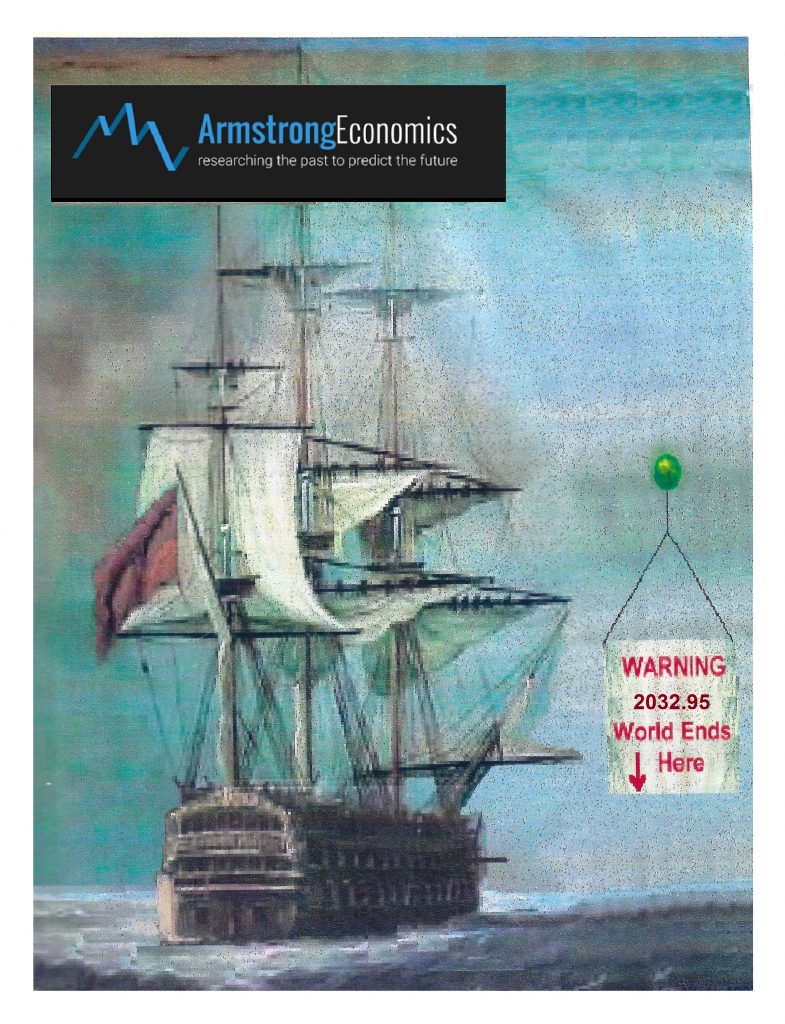 The morons, incapable of ever learning the lessons of life, cry to government that they WOULD HAVE BEEN correct except for some devil who manipulated the market against them. What they are really doing is refusing to admit that they were wrong. That inability to learn the lessons of life keep them perpetually on the wrong side of the cycle. We need those fools. I choose not to be a fool and assume I can teach anyone. If you have the spark of curiosity, then you have the ability to learn and advance in life which is what this journey is all about – the quest for knowledge. 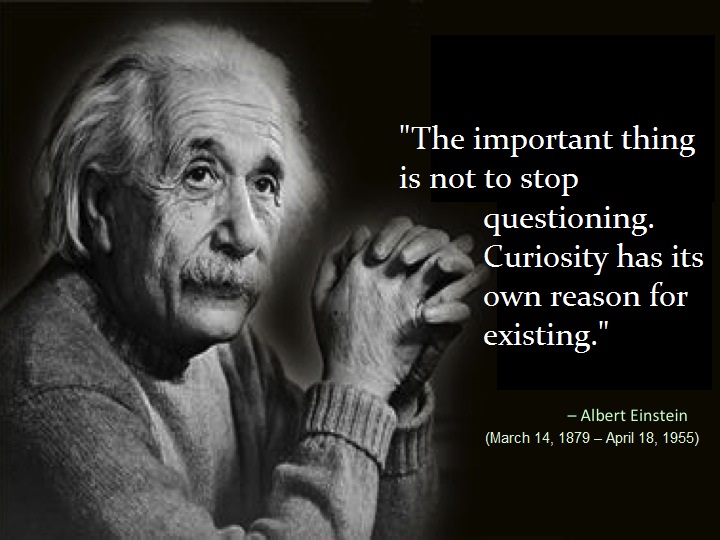 A professor from Princeton University once told me I reminded him of Einstein. I was shocked. I said I was not a genius in physics. He explained to me that was not what he saw. He said it was my curiosity to try to figure out what made things function. It does not matter what the subject might be or the task. It is the curiosity that made one try to sail across the Atlantic when others feared the end of the world. It has been my curiosity which has driven me to try to understand how a business cycle can act so precisely throughout even ancient history when it would seem that it should be an impossibility. This has been the curiosity of my life I have tried to share with those who share my curiosity. 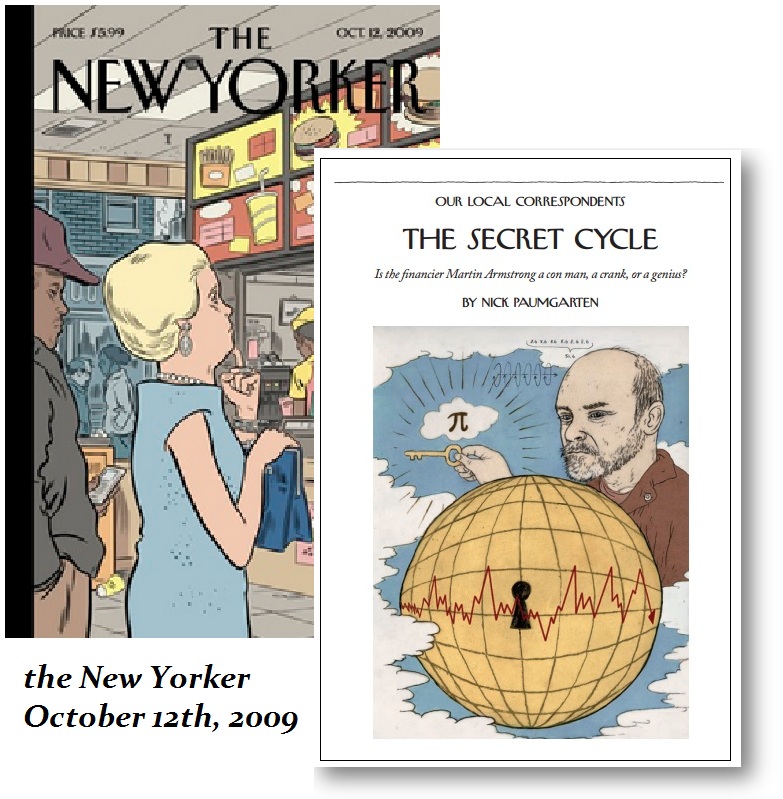 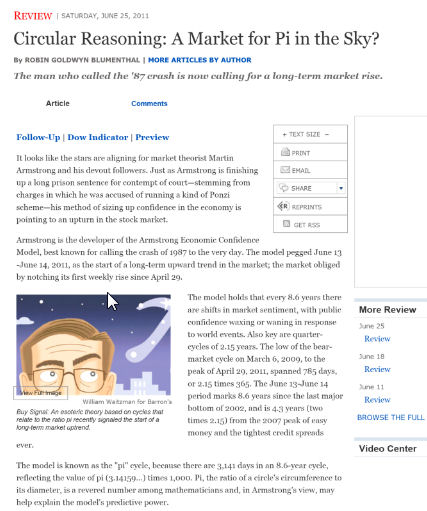 No, the mainstream press will not report this. It is not something the majority is yet willing to hear.

« PRIVATE BLOG – The ECM Turning Point
How Long Does it Take to Accept the Revelations of the Economic Confidence Model? »