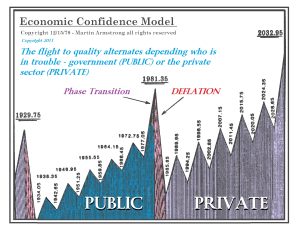 I am confused about the nature of the private wave we are currently in versus the public wave beginning in 1932. Does that mean governments will be more predominant in starting in 1932? This seems contrary to your many statements that the governments today are fighting to maintain control.

ANSWER: During the Public Wave that began in 1934 and ended in 1985, the bond market performed at its best and stocks became extremely undervalued. This started to readjust only after the Public Wave ended in 1985. Only during the final wave does the government start to unravel in a Public Wave. In a Private Wave, stock markets outperform bond markets. Here, people lose their faith in government rapidly. By the half-way mark in a Private Wave, the government becomes aggressive because it sees it is losing control of society. This is why governments will become much more aggressive during the last part of this wave into 2032.