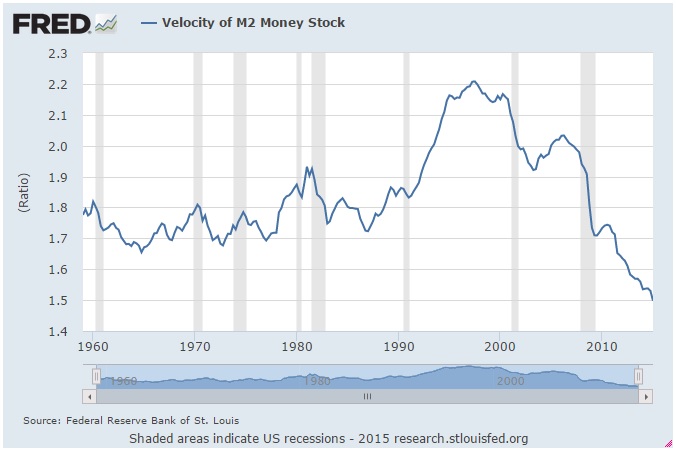 The decline in the VELOCITY of money is rather alarming. On the one hand, it reflects the declining liquidity within the marketplace from the rising trend of hoarding money from banks (DEFLATION), as well as the overall socialistic trend as government consumes a greater proportion of the economy GDP. Velocity = GDP / Money Supply, if the Money Supply increases far more rapidly than economic growth (GDP), then VELOCITY will also decline. However, while this should reflect inflation, it also implies a declining GDP relative to the money supply.

There is no question that the investment strategy has been shifting more towards the short-term. This is why we see selling the 10-year paper moving to the short-term, even at negative rates. It is possible that the VELOCITY of money will decline during periods of excessive money supply expansion, as in hyperinflation with a contraction in GDP in real terms. This does not appear to be the case presently for we are in a deflationary mode rather than inflation. We do see asset inflation in the high end real estate, art, and collectibles, with interest earnings collapsing, yet the cost of living outside of taxes has not risen overall on the same level of assets.

Money supply, also referred to as money stock, classifies the total amount of monetary assets available in an economy at a specific point in time. The definition of M1 money supply is a measure that includes all physical currency, such as cash and checking deposits, and offers the most liquidity. M2 money supply is a measure that includes cash and checking deposits (M1) in addition to “near money”. Near money includes savings deposits, money market mutual funds, and other time deposits that are less liquid than M1 and are not as suitable as exchange mediums, but can be quickly converted into cash or checking deposits.

The collapse in the VELOCITY of money is being contributed to by the decline in GDP failing to keep pace with the money supply.