QUESTION: I mentioned that you said the stock market rallies with rising rates and declines with lower rates to an analyst. He said you were wrong and everyone knows that is not true and President Trump just came out calling on the Fed to lower rates to zero or negative.

You have only shown 1929 as your example. Can you support your argument otherwise?

REPLY: Well Mr. skeptical, we need people like you on the opposite side. It is not my job to convince you. Trump is a borrower and only sees the world through his personal experience. The people with savings and pension funds are being wiped out. That is a statement he has made, which is HIGHLY dangerous and proves I do not advise Trump which seems to be a Democratic accusation running around. 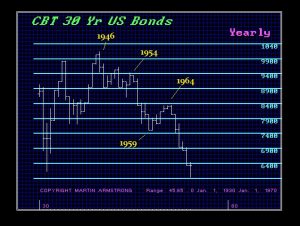 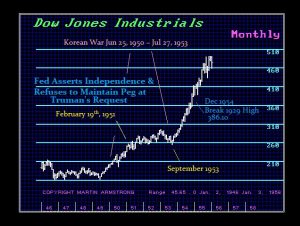 I do not care what period you look at. This notorious group of “everyone” illustrates that if you tell a lie long enough, you yourself will believe what you are saying. These people constituting everyone just repeat what others say without any verification whatsoever. They even teach this nonsense in school. I had one student who said his professor was teaching the same nonsense.

I fully understand that the talking heads on TV also portray the stock market from the borrower’s viewpoint just as Trump has done. Not everyone borrows and the big money does not. So people believe what they want to believe. I prefer to assemble the largest possible database, correlate everything, and see how the world REALLY ticks. So believe what you want. There are always two sides to a market, so I fully respect that it is ABSOLUTELY vital that the majority be on the wrong side for that is what makes the markets move.

« The World through Everyone’s Eyes
Flight from Public to Private »