Paradox of the Bell Curve 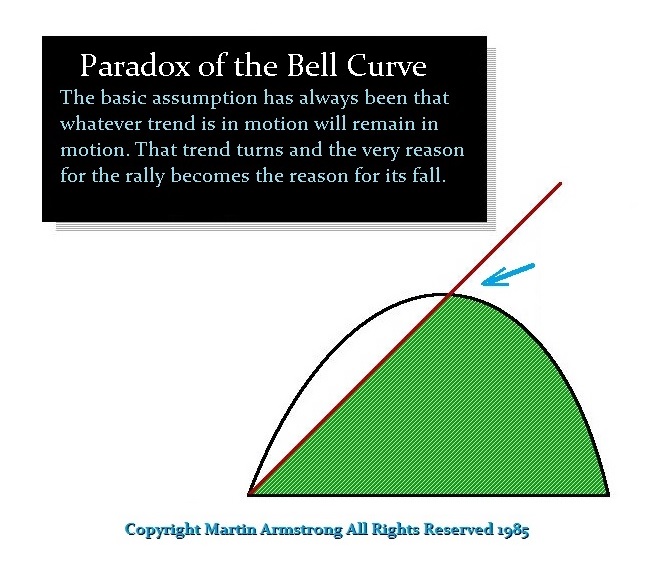 QUESTION: Mr. Armstrong; On the one hand you show the debasement of the Roman currency, but then you say there was also massive hoarding and deflation. Can you explain how do you get deflation with debasement?

Thank you for the the mind food

ANSWER: It may seem to be a paradox, but everything unfolds like a bell curve. This is why you will not get the same result by simply moving in a straight line. We are currently experiencing this under Quantitative Easing by central banks. We have increased the money supply, but we are moving toward negative interest rates, which promotes hoarding. People have not been investing. Instead, they have been sitting on the sidelines trying to figure out what to do.

Sir Thomas Gresham made the observation that debasing the currency results in bad money driving out good money. But what does that really mean? What he is saying is that people start by hoarding old money. It may be a paradox, but debasement does not cause hyperinflation. Rather, debasement causes deflation because the people hoard the vast money supply that was in circulation. Therefore, the government needs to debase to attempt to keep a sufficient degree of money in circulation. The more the government debases, the more people hoard. As people hoard, they contract from commerce and GDP, which results in a reduction in tax revenue that causes government to further debase to make up for revenue shortfalls.

When you introduce a collapse in confidence in government, people no longer “feel” secure and they hoard even the based currency. This is why we find so many hoards of debased Roman currency during the chaotic 3rd century.

It is a curious paradox. Right now people are hoarding, as are the banks and corporations. It is hard to hoard paper currency for you will not be able to distinguish between old and new. This means that the hoarding will migrate to tangible assets, shares, gold, silver, and antiquities.