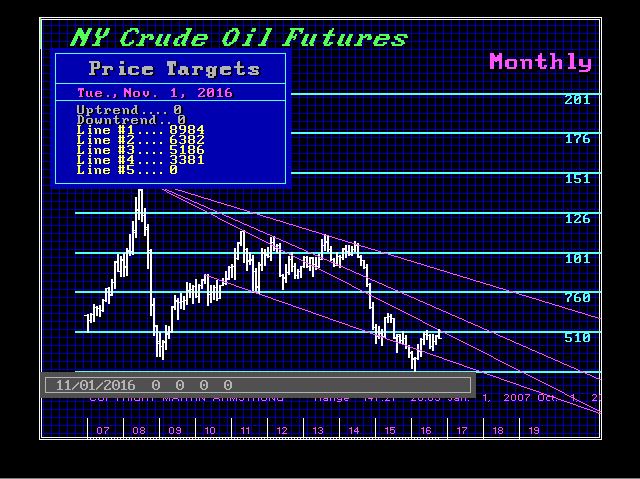 Crude rallied during October reaching the $52 level. Yet for the close, it crashed and burned on the last day to AVOID a buy signal at $49.35 level. We bounced off the first Downtrend Line, which now stands at $51.86 for November. This is what I mean about the hidden order within markets. This has NOTHING to do with me making a great call or some personal opinion to pound my chest. There is something much more significant taking place in market activity. This is what our model simply allows you to see. The numbers are the numbers. It has nothing to do with me being personally right or wrong. The numbers will continue to be generated long after I am gone.

This is all about becoming a STUDENT of the markets. Getting back to our roots as true analysts to observe and ponder. Not to force something to fit a predetermined conclusion because that is what we would personally like to see. From Comey coming out on the exact day of the ECM to announce reopening the investigation against Hillary all the way to our computer forecasting decades in advance that 2016 would be the biggest spike in third party (anti-establishment) voting and having Donald Trump show up on time is all rather amazing to me. It has been my privilege to have bumped into this hidden order in the middle of the night. I never presumed such order existed. This order found me to reveal itself rather than me trying to prove there was some order I could not see. It happens to be a discovery of something extraordinary that connects and binds all of us together reflected through the price movement of markets, which is the product of human interaction on a global scale.

NOTHING, absolutely NOTHING, takes place without a reason. The failure of oil to have elected that Monthly Bullish Reversal yesterday just as gold could not elect $1362 on a monthly basis and then crashed and burned to avoid the Quarterly Bullish Reversal in the $1340 zone, are subtle reminders that there is hidden order, which defeats the rhetoric of everyone.