Understand How We Think 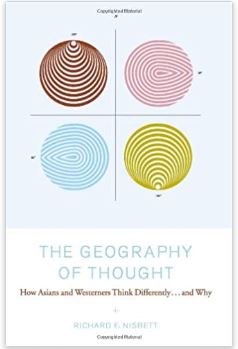 QUESTION: I see how you were surprised by your dog in discovering how she studies your patterns and predicts where you are going. My dog does the same. I didn’t pay attention to those traits until you wrote about them. The very trait of how to think is fascinating. Have you incorporated that into Socrates?

ANSWER: Yes. I had a friend who was a psychologist and he explained to me many years ago that there were two fundamental types of thinking in humans – linear v dynamic.  There is a good book written by Richard E. Nisbett entitled “The Geography of Thought, How Asians and Westerners Think Differently … and Why.” He attributed his work to a Chinese student who said: “You know, the difference between you and me is that I think the world is a circle, and you think it’s a line.” He goes on to quote him:

The Chinese believe in constant change, but with things always moving back to some prior state. They pay attention to a wide range of events; they search for relationships between things; and they think you can’t understand the part without understanding the whole. Westerners live in a simpler, more deterministic world; they focus on salient objects or people instead of the larger picture; and they think they can control events because they know the rules that govern the behavior of objects.

I can say I never had to explain cycle theory in Asia to anyone. In the West, we were taught to think linearly. What stunned me about my dog was noticing that she thought dynamically. I had no idea any animal possess such a thinking process. There are dogs who even have done simple math. Understanding how the thinking process works was absolutely essential to be able to create any AI program that was functional. Oh yes, there were those trying to create a neural net, dump all the data in, shake it up, and somehow it would unexplainably come forth with the answer. IBM tried that and it failed.

There was just a lot more to how we thought that necessitated investigation. Anyone who thinks they cannot learn by observing even how a dog thinks is so biased that they will never discover anything. Discovery requires an open mind. You cannot discover something unless you look. With dogs, most people never bothered to look. Only recently people have started to investigate and have been also surprised that dogs have even beaten chimps in some tests. Another’s friend’s dog refuses to look at herself in a mirror but obviously knows it is her. Self-conscious?

« Can Society Ever Learn for its Mistakes?
Forecasting the Future »