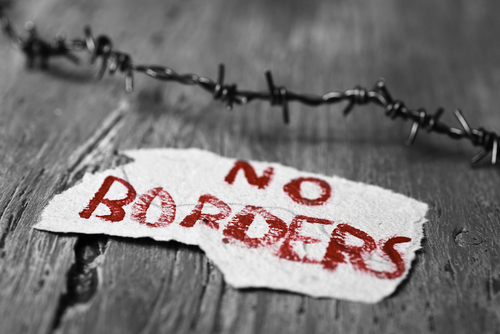 We tend to assume that the freedom of movement is confined solely to migration and travel. There are four aspects to the freedom of movement, and migration or travel is only one. Yes, we warned that the Schengen Agreement would come to an end and the European refugee crisis has enabled that decline. We warned that this agreement, signed in 1985, was reaching the end and would begin to be “overthrown … come 2016.867 or November 12, 2016,” which was pi – 31.415 years from the signing.

There are four facets to the freedom of movement, which people far too often do not look at or understand their vital role in furthering the development of civilization. What truly made Rome a great enduring Empire was more than just might. Roman imperial history cannot ignore the freedom of movement in all four aspects: 1.) translation of texts, practices, and ideas; 2.) communication or the movement of written documents (i.e. today’s internet, phone calls, and texting); 3.) migration (i.e. officials, merchants, students, etc.); and 4.) the free movement of goods and services. The interrelationships among the four aspects of the freedom of movement are critical to the advancement of civilization.

1.) The freedom of movement that enabled the translation of concepts and ideas has often been curtailed. For example, Lenin’s book “What is to be Done?” was first published in Germany during 1902, but it was outlawed for publication and distribution in Russia. For my own movie, “The Forecaster,” the distribution rights were bought in the United States and Switzerland, and then they refused to show it. In London, the film was not blocked, but the night of the debut the Evening Standard ran a story about a local headhunter named Martin Armstrong who said the bankers were worth every penny — but they used my picture. The freedom of translation is denied all the time and governments employ such tactics out of their self-interests.

Today, this would include books, movies, and also the internet. Turkey, for example, blocked Facebook, Twitter, and YouTube throughout Turkey on Friday, November 4, 2016. They also blocked the messaging services WhatsApp, Skype, and Instagram. The United States monitors everything through the NSA. Europe has also been looking at restricting the internet (eu-restrict-internet).

2.) The aspect of communication in the freedom of movement involves written documents, phone calls, and texting. The two major inventions that made the Roman empire soar were roads and mail service. Yes, the Romans were really the inventors of the pony express. Letters have been discovered at Vindolanda in Britain at Hadrian’s Wall. Discoveries include formal letters of military issue, a letter from Octavius about supplies, the oldest letter from a woman, and even an invite to a birthday party back in Rome. Such letters could be delivered in just seven days.

Restricting this aspect of free movement changes the role of the state as well as relations between individuals and states. The implications of the assault on the free movement of communications are expanding under the pretense that they need to track what people are doing for taxes. This direct assault is altering relations in ways of organizing and thinking among individuals while hampering the expansion of global commerce.

3.) The third aspect of the freedom of movement is migrating one’s actual person. The saying, “All roads lead to Rome” was indicative of Rome’s vast road network that facilitated this free movement of people and trade. This restriction is expanding once again insofar as restrictions on carrying anything of value due to taxes. I have been pulled over personally entering Britain and returning to USA asking how much money do I have on me. Governments have become the new highway robbers of the Middles Ages that gave right to the Knights Templar to protect travelers. There are already visa requirements for many states that are typically used when there are concerns of migration. In many instances, you have to prove you have assets before getting even a tourist visa.

4.) Finally, the fourth aspect of the freedom of movement is goods and services. The Roman Empire facilitated free trade, which was the foundation of the Roman economy. True, Donald Trump soared to the White House on the back of middle class America who were forgotten when they lost their jobs to foreign imports. Yes, you can put up barriers and tariffs to protect local jobs in every political state. However, this is a losing battle and it only looks at labor in the same manner as Karl Marx who took the position that nothing has value except for the labor to produce it. Keeping overvalued jobs may bring cheers from displaced workers, but it also imposes higher costs to the consumer.

Why are jobs leaving the country? It is not due exclusively to cheaper labor. That is total nonsense. It is the huge cost of regulation and taxes. The higher government raises taxes, the more overvalued the cost of labor. When I helped restructure companies looking to set up plants inside Europe, I had to weigh all costs. I placed manufacturing jobs in Britain because 1.) they had the skilled labor force, and 2.) they had 40% less in taxation from the corporate aspect compared to Germany and certainly France. If they needed the best tax deal without the skilled labor for manufacturing, I placed those companies in Ireland. It was not the cost of labor that was the deciding factor, but the combined taxation levels on companies and labor.

The United States is the most unstable country when it comes to taxes. You cannot set out a business plan for 25 years because the tax rates may change every four years. Companies leave the U.S., not because of the price of labor, but to have a safe and secure place to do business without the rules changing. Therefore, restricting the free movement of goods and services denies the ability of the economy to grow and adapt. Shall we ban computers because they can do your taxes faster and cheaper than an accountant? How many accountants were denied a job because of Turbotax?

If government restricts the freedom of movement with respect to people, trade, ideas, communication, and good and services, the world economy cannot possibly survive and this places us at risk of a frightening Dark Age all because governments fear losing power and are desperate to hunt money for confiscation. The first thing we must do to save all four aspects of the freedom of movement is to sharply reduce government’s invasion into every possible aspect of our lives.

Trump must not punish companies for leaving America assuming it is just cheaper labor. That is not the issue. Let’s deal with the real stuff – create a secure tax rate that does not change. Then you will see more companies return home than in any point in history. I testified before the House Ways & Means Committee in Congress. I was not asked to testify because of my opinion or ideas. I was asked to testify because we had under contract globally the equivalent of 50% of the U.S. National debt and advised on restructuring multinational companies more than anyone else in the world. I had a front row seat. That’s why I testified.

You May Forward This To Every Politician on Capital Hill