Does the Belief in a God Temper One’s Actions?

Many questions have come in about our computer forecasting that this grand effort to take over the world will fail. What you must understand is that when people do not believe in any God, they tend to think that they are also above the law, and that is justified for it is a bigger purpose.

Soros has publicly stated that he does not believe in God, and thus it is up to him to manipulate the world economy to fulfill his grand visions. He has also stated that he had no remorse for helping the Nazis against the Jews when he was a Jew pretending to be a Christian.

Then you have Klaus Schwab implying that he too does not believe in God, for he simply says that the future is up to us to create. That suggests that there is also no divine design to how everything functions. 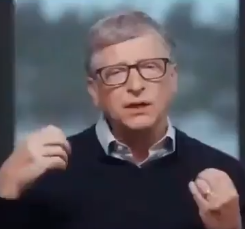 Bill Gates cleverly answered the question for “Rolling Stone.” He actually said: “I agree with people like Richard Dawkins that mankind felt the need for creation myths. Before we really began to understand disease and the weather and things like that, we sought false explanations for them. Now science has filled in some of the realm – not all – that religion used to fill.” He then tried to soften his response saying: ” I think it makes sense to believe in God, but exactly what decision in your life you make differently because of it, I don’t know.”

What all three seem to have in common is this idea that God is really irrelevant and it is just a myth spun to control the people thereby agreeing with Karl Marx. This all seems to follow a pattern that if you also do not believe in God, then you do not have any restraint or remorse. This reminds me of the monk Arnaud Amalric who died in 1225. The European crusade was primarily led by the French crown in an attempt to bring southern France, which was largely controlled by the Counts of Barcelona, under their political control. It was during the acclaimed religious war, which was really for French political gain, that the monk Amalric is best remembered for allegedly advising a soldier who was worried about killing orthodox Catholics in the process of killing declared Cathar heretics. He said:

“Novit enim Dominus qui sunt eius.” (“Kill them. For the Lord knows those that are His own.”)

The Cathars believed in two Gods or philosophies, with the first one being good and the second being evil. This idea emerged from the clash between the vengeful God of the Old Testament and the Love Thy Neighbor God of the New Testament who they saw as the creator of the spiritual realm, contrasted with the evil Old Testament God who was viewed as the creator of the physical world they identified as Satan.

This lack of belief in anything seems to inspire the evilest times throughout history. It appears that the absence of any belief in any God really leads to the total absence of any moral consideration, for there is also nobody waiting to judge you – even yourself. Hence, they fear not being sorted out by anyone after death.