The International Criminal Court – Fighting For the People (Part I)

A team from the UK has filed a complaint with the Prosecutor of the International Criminal Court on behalf of the people. The report alleges that government officials, pharmaceutical executives, and others profiting from the pandemic have violated the Nuremberg Code, committed war crimes and crimes against humanity, as well as aggression against civilians. The 44-page complaint extensively lists the crimes committed by the following individuals: 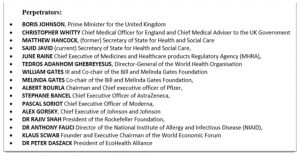 The complaint states that the aforementioned individuals have committed the following crimes:

– Violations of the Nuremberg Code

– Violation of Article 6 of the Rome Statute

– Violation of Article 7 of the Rome Statute

– Violation of Article 8 of the Rome

– Violation of Article 8 bis3 of the Rome Statute

The document contains a lot of detailed information that I will summarize:

COVID Is a Biological Weapon – Gain of Function Research

COVID was created in a laboratory. Leo Poon. Dr. Li-Meng Yan and her team published a report (Appendix 4) claiming that the novel coronavirus was developed “as a laboratory product created by using bat coronaviruses ZC45 and/or ZXC21 as a template and/or backbone.” ZC45 and ZXC21 were discovered between July 2015 and February 2017 in military research laboratories. Once the Shanghai Public Health Clinical Centre, a non-military laboratory, published a conflicting report and was quickly forced by the government to retract its statement. “The existing scientific publications supporting a natural origin theory rely heavily on a single piece of evidence – a previously discovered bat coronavirus named RaTG13, which shares a 96% nucleotide sequence identity with SARS-CoV-2.”

Again, all evidence discredits the notion that the COVID-19 virus developed naturally. “The National Institutes of Health (NIH) in the USA has admitted to funding gain of function research on bat coronaviruses at China’s Wuhan lab – despite Dr Anthony Fauci repeatedly denying this.” There is clear evidence that the NIH funded gain of function research between 2014 and 2019. A $3.1 million grant was awarded to EcoHealth Alliance for coronavirus studies on bats. Another grant of $599,000 was provided to the Wuhan Institute of Virology to also study COVID in bats.

Conclusion: The coronavirus did not develop naturally. Rather, the virus was deliberately created in a laboratory after years of government-funded research.

The vaccine received temporary authorization under Regulation 174 of the Human Medicine Regulations Act (2012). The report notes that mRNA vaccines have never been approved for human usage and the effects are completely unknown. “The long-term effects and safety of the treatment in recipients are unknown. It is important to note that the Corona Virus ‘vaccines’ are the world’s first introduction to the synthetic m-RNA technology and all previous immunisations [sic] worked in a totally different manner, by way of introducing a deactivated or weakened virus to the body to trigger a natural arousal of the immune system against it.”

The COVID vaccination should be categorized as a gene therapy as it does not meet the requirements for the term “vaccine.” In February 2021, Merriam-Webster changed the definition of “vaccine” to include the COVID-19 mRNA injection. Dr. Mike Yeadon stated in the report: “It’s not a vaccination. It’s not prohibiting infection. It’s not a prohibiting transmission device. It’s a means by which your body is conscripted to make the toxin that then allegedly your body somehow gets used to dealing with it, but unlike a vaccine, which is to trigger the immune response, this is to trigger the creation of the toxin.”

Conclusion: The COVID-19 injection is not a vaccine, but rather a mass experimental form of gene therapy with unknown consequences.

Presence of Graphene Hydroxide in Vaccines

German chemist Dr. Andreas Noack was one of the EU’s top graphene and carbon experts who formulated his doctoral thesis by converting graphene oxide into graphene hydroxide. Dr. Noack examined the vaccines along with other experts and found that the vaccines contain graphene hydroxide. “On November 23, 2021, Dr. Andreas Noack released a video explaining what graphene hydroxide is and how the nano structures injected into the human body act as ‘razor blades’ inside the veins of ‘vaccine’ recipients. Dr. Andreas goes on to explain how due to the nano size of the graphene oxide structures they would not show up on an autopsy as toxicologists can’t imagine that there are structures that can cut up blood vessels causing people to bleed to death on the inside so they would not be looking for them, given their atomic size.”

After speaking out about graphene hydroxide in vaccines on a live stream broadcast, Dr. Noack was arrested on film by German police. On November 26, 2021, Dr. Noack was attacked and murdered. His case remains unsolved.

Conclusion: There is graphene hydroxide in the vaccine, and Dr. Noack was assassinated for speaking the truth.