Central Bank Reserves – The Rise of the Yuan

QUESTION: Mr. Armstrong; I understand that your model shows that China will become the dominant economy post-2032. The IMF added the yuan to their SDR basket. Are central banks starting to use the yuan in reserves in a major way yet?

ANSWER: Yes. The ECB (European Central Bank) converted a half-billion euros to yuan. So that is not what you would call major. This is a first step in the true internationalization of the yuan. The Bundesbank has also converted a small portion of their reserves. So it is starting. Reports that China was selling off US debt are false. The U.S. debt to China is $1.2 trillion as of October 2017. That’s 19% of the $6.3 trillion in Treasury bills, notes, and bonds held by foreign countries. The rest of the $20 trillion national debt is owned by either the American people or by the U.S. government itself. What China and most governments have been doing is reducing their holding in maturity from 10 years down to 5 years or less. 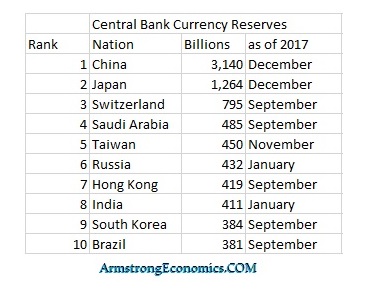 Despite what everyone may believe, the ECB reserves rank only number 30 on the list among central banks with just 75.1 billion. China has the biggest reserves of all followed still by Japan. Other than Switzerland, no European country ranks in the top ten. This is a reflection of their status in world trade as well. It only follows reason that the Chinese yuan will become a wider used reserve currency as it also dominates trade.