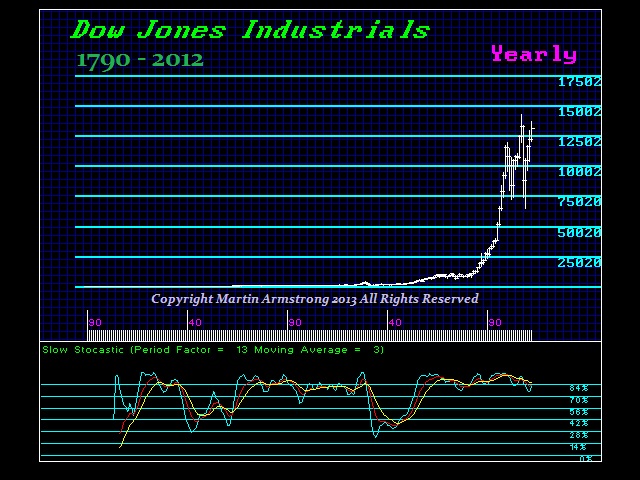 The History of the Dow Index

It was on July 3rd, 1884, when Charles Henry Dow first began publishing his Dow Jones Index Average. Eight months later when the index was being published daily it was composed of 12 stocks, 10 of which were railroads. Keep in mind that it was the railroads that were the big market during the 19th century. They were effectively the internet connecting markets back then giving birth to a distribution system that enabled the new idea of mail order. The first company to produce a catalogue and to use the railroads to deliver its products was Sears & Roebuck. Richard W. Sears was a railroad agent in North Redwood, Minnesota. It was Sears who saw the railroad and understood its delivery capability. Upon receiving an errant box of watches, he started a business selling watches and jewelry. Alvah C. Roebuck was a watch repairman whom Sears hired as his business expanded. Roebuck eventually partnered with Sears to form the foundation of Sears, Roebuck and Co. It was 1888 when Sears first used a printed mailer to advertise watches and jewelry. It had been the Homestead Act of 1862 that inspired America’s westward expansion that was followed by the railroads. To expand knowledge, the postal system aided the mail order business by permitting their catalogs to be sent at just of one cent per pound. Then by 1896, there was the introduction of the Rural Free Delivery. The opened the door for the advent of the mail order business and the Sears, Roebuck and Co. catalog began in 1894 catalog declaring it the “Book of Bargains: A Money Saver for Everyone.” This the railroads expanded the economy much like the internet.

During World War I, the US share market was closed July 30th, 1914 for the next four months and thus there was no Dow Index during this gap as well. Of course, as with all things it seems, conspiracy theories abound. Some have actually argued that the reason for the closure of the New York Stock Exchange was postulated by William L. Silber in his book entitled When Washington Shut down Wall Street: The Great Financial Crisis of 1914. Silber claims that Secretary of the Treasury, William McAdoo closed the exchange because he wanted to conserve the US gold stock in order to launch the Federal Reserve System later that year with enough gold to keep the US on the gold standard. That is just not plausible since with World War I, Britain peaked as the Financial Capital of the World and gold was pouring into the USA running from the risk of war. Indeed, the simple explanation was just a worry that the markets would plunge because of panic over the onset of the World War. Nevertheless, the market reopened on December 12th, 1914, the index closed up at 74.56. The War did not have the devastating impact many feared.  Capital would not flee the United States, it flees the region engulfed in war.

It was finally on October 4th, 1916, when the Wall Street Journal began to publish an entirely new Industrial index of 20 stocks in total with 8 stocks from the old index that were the industrials and 12 new stocks. This new index was traced the index back to December 12, 1914 at that time where the World War I Crash took place that exceeded the 1987 Crash reaching a one-day decline of 24.39%. The original index with the mix of industrials and railroads was about 36% higher than the second index series.

On October 1, 1928 the Dow Jones Industrial Average was expanded to 30 stocks and was then first quoted in the Wall Street Journal. It contained 14 stocks from the second list of 20 and 16 new stocks. Its level was consistent with the second list, so no adjustment was necessary.