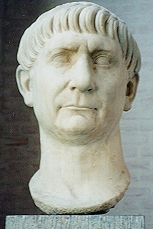 Marcus Ulpius Trajanus, was born at Italica in Spain about the year 52 AD. His family was originally from Umbria in Italy. His father, of the same name, was a senator and had served as consul. He was also governor of Asia and Syria at one time. His mother was Marcia, but unfortunately nothing is known of her background.

In Spain, Trajan had an early rigorous military training in the frontier provinces holding several important military posts. Eventually, Trajan was appointed Consul in 91 AD, and was appointed Governor of Upper Germany by the Emperor Nerva. Trajan’s reputation for efficient administration of Upper Germany and support of the military greatly impressed the Emperor Nerva, which had much to do with his adoption by Nerva as the heir to the imperial throne.

Following the death of Nerva, Trajan’s first goal was to strengthen the frontier defenses between the headwaters of the Rhine and the Danube. Trajan then set out for Rome arriving in the city around 100 AD. He immediately set about strengthening his political power base by winning the support and confidence of the Senate as well as the citizens of Rome itself. Trajan’s good character, wisdom and affable personality aided him greatly in accomplishing that goal. His deep respect for constitutional government and the fairness of law, was quite apparent to everyone.

After gaining the confidence and support of the people and the Senate, Trajan then began a campaign of territorial expansion. Over a 5 year period, the success of his conquest of Dacia, led to that region becoming a province of the Roman Empire. This conquest was commemorated by his famous column which still stands today in Rome.

Trajan also carried out a substantial building program in Rome including his expansion of the Forum in which Trajan’s Column stands today. He repaired and constructed many roads, bridges, and aqueducts throughout the entire Empire including the Circus Maximus. He also expanded the harbour at Ostia, originally designed by the Emperor Claudius, with a new inner harbour hexagonal in shape.

Trajan’s most important building projects took place during the year 107 AD when he used the spoils from the Dacian conquest to build not merely Trajan’s Forum but also a new market similar to a two story shopping mall of modern time. He also built Trajan’s Baths on the site of Nero’s Golden House and the Naumachia, which was a huge amphitheatre for mock sea battles. In addition, Trajan issued an extensive series of commemorative coins whereby historical issues of the Republic as well as important previous emperors were honored from Julius Caesar to Nerva. 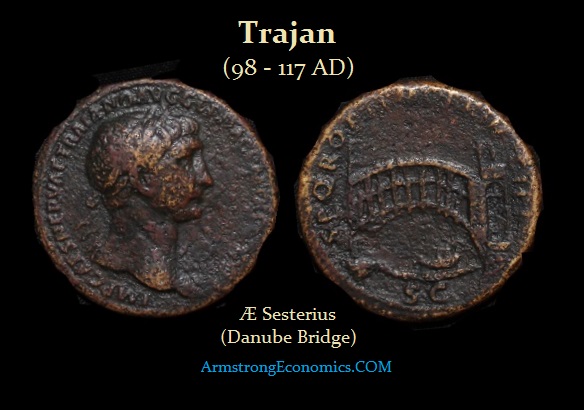 Trajan also built the last of the great aqueducts of Rome – the Aqua Traiana. Indeed, Trajan’s building projects were numerous throughout the empire and besides all of these accomplishments, he also built a magnificent bridge across the Danube, which he proudly displayed on his coinage.

During the latter years of his reign, Trajan turned his attention to the eastern frontier focusing directly on the threat presented by the kingdom of Parthia. In 113 AD, Trajan set out to take both Armenia and Mesopotamia. His campaign was again successful adding four new provinces to the Empire. In 115-116 AD, he penetrated into the heart of Parthia itself capturing its capital – Ctesiphon. By this time, revolts broke out in a number of provinces, including Judaea. The Jewish revolt in the east forced Trajan to withdraw from the Syrian capital of Antioch. He successfully put down the Jewish revolt and was then determined to return to Rome to direct operations for a new invasion of Parthia.

According to Cassius Dio, Trajan began to suffer from circulatory problems. He appears to have suffered from a stroke, which left him partially paralysed causing Trajan to suspect poison. Unfortunately, Trajan died en route to Rome at Selinus in Cilicia, during August of 117 AD. Trajan’s Column, which still stands in his expansion known as Trajan’s Forum in Rome, served perhaps as the resting place for his ashes in its base.

Trajan was a model Emperor who was often held in high regard ranked along side of Augustus. By the fourth century, the Senate of Rome still prayed for their emperors using the words “More fortunate than Augustus and better than Trajan.” His reputation as a just, wise and noble leader continued well into the Middle Ages when Dante gave him a place in Paradise.

Historians have always debated whether or not Trajan adopted an heir before he died. Many believe that his wife Plotina may have falsified the adoption of Hadrian, who had always been her favorite at court. The truth of this adoption could not be safely disputed by the Senate, however, and thus the acknowledged heir became Hadrian the next Emperor of Rome.

A remarkable pair of documents have survived from the correspondence between the Emperor Trajan and Pliny the Younger who was governor of Pontus/Bithynia from 111-113 AD. The following is a transcript of an exchange between these two famous individuals which offers great insight into the character and wisdom of both men. This exchange between the two men also provides a look into the Christian movement of the time and how it was regarded during the reign of Trajan.

Trajan first received his consulship in 91 AD. He received the tribunician power late in 97 AD. For a brief period following his accession, Trajan title remained as TR.P. However, soon afterwards, he decided to continue the dating system on his coinage as established by Nerva (TR.P.II.) and his title thus became TR.P.III. on September 18th, 98 AD. Thereafter, Trajan subsequently renewed his tribunician power each year on that date. 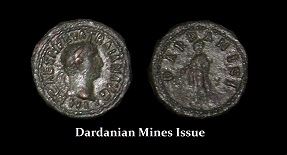 Under Trajan and Hadrian several series of bronze quadrantes were struck in the names of the imperial mines in Noricum, Dalmatia, Pannonia, and Moesia (Dardania). These operations supplied metal for the mint at Rome, and perhaps were the sites of workshops to produce coinage for local circulation or as donatives. It has been suggested that these mines issues were struck at Rome itself, and served some unidentified function, much as the contemporary ‘nome’ coinage struck at Alexandria in Egypt. Whatever the circumstances, these pieces saw limited use, and except for one rare type struck by Marcus Aurelius, were not issued during any other period. 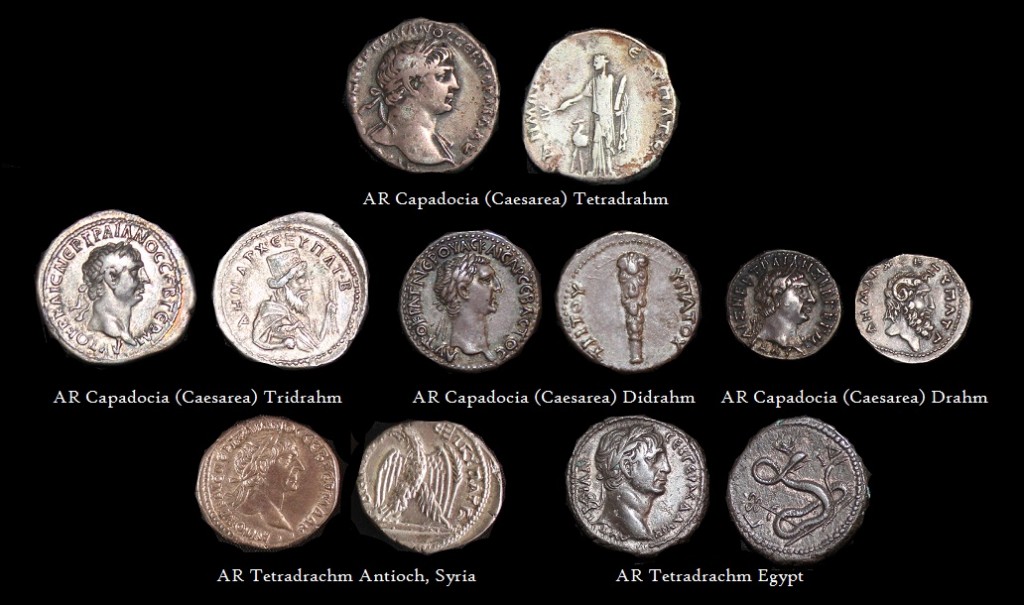 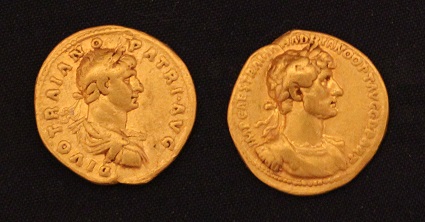 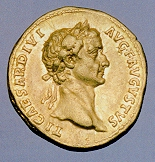 Restoration Aureus of Tiberius by Trajan

In this interesting series, issued circa 107 AD, there are restorations of many of the Republican denani as well as aurei beginning with Julius Caesar followed by the Emperors Augustus, Tiberius, Claudius, Galba, Vespasian, Titus and Nerva.

The tradition of honoring previous men in history began during the Republican era when various contemporary men of position would mint coinage displaying the portrait of an honored ancestor. In many ways, such commemorative issues were also an attempt to distinguish themselves as honorable men by publicly displaying their heritage thus legitimizing their current political position.

In the case of Trajan, the extent of this series appears to have been intended to glorify the history of Rome by restoring Republican as well as Imperial coinage of the previous several hundred years.

In the year 107AD, the Emperor Trajan attempted to revitalize the money suppy ordering that all the old coinage be “melted down all the worn-out coinage” according to the historian Casssius Dio. In essence, the treasury was greatly depleted due to his prolonged campaign to conquer Dacia, modern day Yugoslavia region. Trajan actually demonitzed all silver and gold coinage that had been issued prior to the reign of Nero and his monetary reform of 64AD, which was the first step in the debasement. Therefore, Trajan was recalling all old “worn” coinage and reissuing it with at a lower standard of his period.

At the time of Trajan, the finances of the Empire were is crisis. The fineness of the silver denarius when he came to power in 98AD was 93.5%. In 100AD, Trajan lowered the fineness to 92.75%. As the cost of the Dacian war escalated, he again reduced the fineness to in 103AD to 91.5% This would decline further reaching 90% in 112AD.

Consequently, Trajan demonetized the old coinage which was of a heavier silver standard meaning they were no longer valid payment for taxes. This forced people to return them in exchange for new denarii. The old were then melted and in effect this increased the money supply by about 10%. 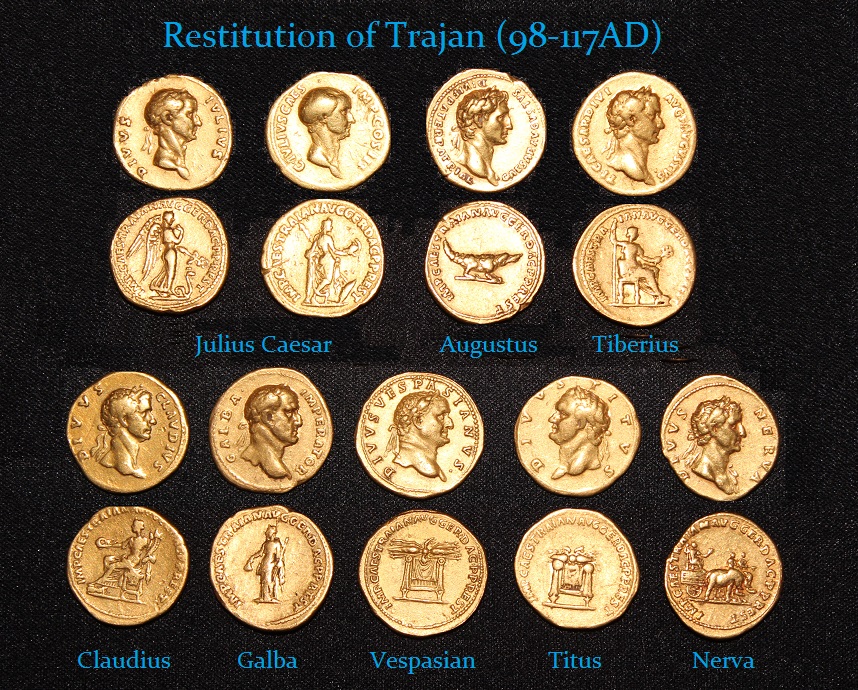 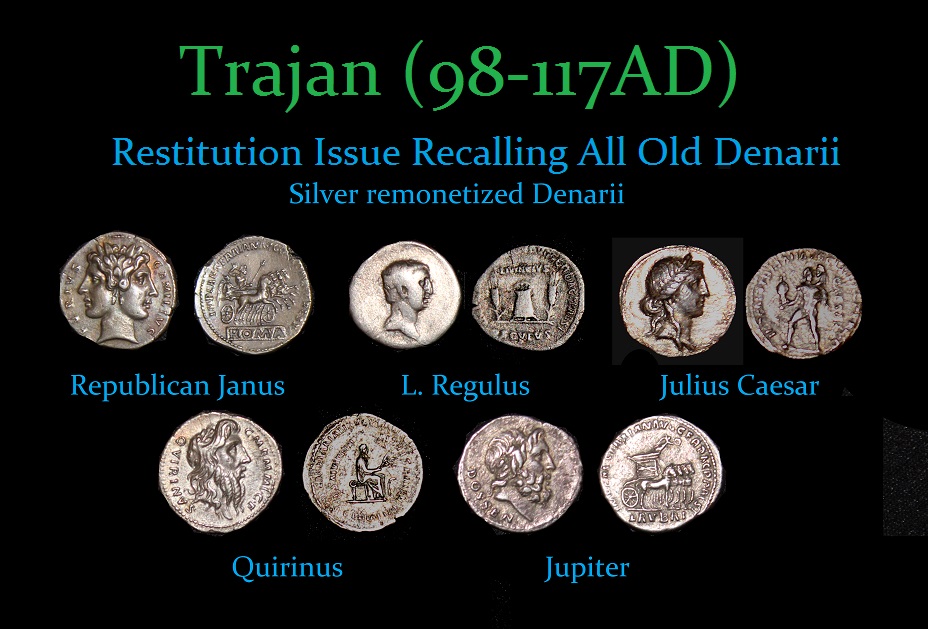