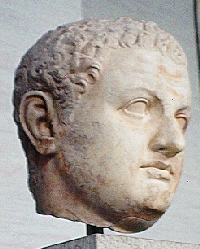 Titus Flavius Vespasianus Junior was the elder son of Vespasian and Flavia Domitilla. Titus was born in Rome on December 30th, 39 AD. Vespasian had served under Claudius in his conquest of Britain with distinction and honor. His reward was to allow his son Titus to be educated at court. Thus Titus was educated along with Britannicus, Claudius’ ill-fated son, and the two became good friends.

Titus began his career as a military tribune in Germany and Britain between 61 and 63 AD. Titus then returned to Rome where he married Arrecina Tertulla who was the daughter of the former commander of the Praetorian Guard. Unfortunately, his bride died within a year of their marriage. Titus remarried once again but this time he chose someone of higher birth – Marcia Furnilla. This second marriage also lasted a brief period since his wife’s family was closely linked to the opposition of Nero and after the attempted poisoning of Nero in 65 AD, Titus divorced his wife. Nonetheless, Titus did father a daughter with Marcia namedJulia who would later become the mistress of his brother Domitian.

Between 66 and 70 AD, Titus’ career took a turn. He was appointed commander of the 15th Legion and served in his father’s Jewish campaign. Titus grew closer to his father at this time and became a trusted agent.

In the chaos of the Civil War that emerged following the death of Nero, Titus began to support his father’s cause following the murder of Galba. Titus gathered support among several governors to back his father’s bid for power. When his father was proclaimed Emperor on July 1st, 69 AD, Titus was raised to the rank of Caesar. When his father left to become Emperor, Titus remained to carry on the war and captured Jerusalem in 70 AD. After the fall of Jerusalem, Titus gave orders to his legion commanders to kill every male Jew in the province, in order to prevent any further uprisings in the future.

On his return to Rome in June of 71 AD, Titus was given a splendid reception and his father made him his colleague in the government. Titus shared the reigns of power and Suetonius described him as his father’s partner and protector. Titus assumed command of the Praetorian Guard no doubt to perform the role of protector given the treachery that they had expressed toward Galba. Suetonius tells us that there was another reason for Titus’ appointment to the Guard. He used his power to convict any and all political opponents often resorting to forgery. It was this period under his father that won Titus the reputation of being cruel and ruthless.

His father Vespasian died of natural causes so to speak. He apparently went to Campania and visited a natural spring known as Aquae Cutiliae. After drinking the waters, he contracted some sort of bacteria which led to almost constant diarrhoea. On June 23rd, 79 AD, Vespasian finally stood on his feet and with those immortal words “An emperor ought to die standing,” collapsed into the arms of his attendants.

Thus, Titus succeeded his father on that day. Based upon his reputation, many expected Titus to become another Nero. Much to their surprise, Titus’s nature was transformed. He became one of the most caring and generous Emperors of Rome.

On August 24, 79 AD, Mount Vesuvius erupted burying alive residents of both Pompeii and Herculaneum. Titus, like a good head of state, immediately organized a disaster relief effort and traveled to visit the site personally on two occasions. Pompeiihas been perhaps the most important relic from the past yielding untold insight into the everyday lifestyle of Rome at this point in history. One villa in particular, known as Boscoreale has yielded splendid works of art and one of the largest hoards of Roman gold coins to date.

Unfortunately, Pompeii was not the only disaster to befall Rome during the reign of Titus. The City of Rome itself was hit by another devastating fire which consumed most of the area between the Capitol and the Agrippa’s Pantheon. To make matters worse, a severe epidemic struck the populace. At every turn, Titus was there to support and help the people and as such his reputation as Emperor was transformed from Titus the Caesar. 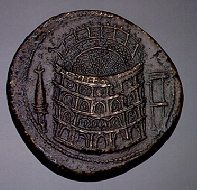 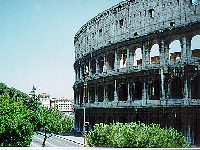 Titus completed the construction of the Colosseum, started by his father, partially as a gift to the city begun initially to compensate for Nero’s excesses. But the Colosseum was also partly to commemorate his victory over the Jews and the sacking of Jerusalem.

The only military conquests during his short 2 years, 2 months and 20 days reign was the expansion of Roman territory in Britain. The Romans were pushing northward in an attempt to conquer Scotland. Although there was some progress, the conquest of Scotland was never accomplished and the effort was finally abandoned under Hadrian (117-138 AD) who erected the famous wall which bares his name.

Titus died at the age of 42 on September 13, 81 AD. His death appears to be of natural causes despite the fact that Suetonius reported a rumor that his brother Domitian tried to help his brother die a bit sooner by packing him in a chest of ice to bring down a fever. Nonetheless, Titus’ last words have also survived: “I have made but one mistake.” Nobody knows what that mistake was and there is certainly little shortage of speculation. 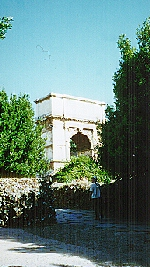 Titus was deified immediately by his brother Domitian. The Senate erected the Arch of Titus which still stands today in the forum. The inscription on the Arch reads… “From the Senate and people of Rome to the deified Titus Vespasianus Augustus, son of the deified Vespasian.”

Note: Gold coinage as Augustus is much rarer than as Caesar

As Caesar under Vespasian