Coinage of the Second Jewish Revolt Against Rome 132-135AD

The various historical sources differ as to the specific provocation which sparked the Second Jewish Revolt.Dio Cassius cites Hadrian’s foundation of a Roman colony, Aelia Capitolina, at Jerusalem, involving the blasphemy of a shrine of Jupiter Capitolinus on the ruins of the Herodian Temple; however Jewish sources suggest this occurred only after the revolt. Hadrian’s biographer Spartianus blames his prohibition of circumcision. One of the Midrashim suggests that Hadrian had promised to rebuild the Temple, then after preparations were well under way reneged because of complaints from the Samaritans. Whether any or all of these events provided a cue for the revolt, its real character was not that of a protest but of a messianic national movement. The program of the revolt is plainly announced on its coinage. First of course is the recovery of national sovereignty, implied by the very act of minting precious metal coinage and blazoned forth by the legends proclaiming redemption and freedom. The second goal was the reconstruction of the Temple at Jerusalem and the restoration of its rituals, upon which the spiritual and material well.being of the nation of Israel were believed to depend. The tetradrachm, the most impressive denomination of this series, bears the heart of this propaganda messagethe dramatic image of the Herodian Temple destroyed by Titus, which must be rebuilt to return God’s grace to Israel. The reverse shows a lulay, a bundle of palm, myrtle and willow branches, and an etrog or citron fruit, both used to pray for rain at the autumn festival, Sukkot. This superb specimen of the most celebrated prototype of the Second Revolt coinage shows distinct traces of the underlying Roman type of the Syrian provincial issue on which it was, overstruck: profile of emperor’s head on the obverse and eagle’s wing on the reverse.

It is well-known that all coins of the Second Revolt are overstruck on existing Roman or Greek imperial coins. This practice was no doubt motivated in part by considerations of convenience, but there was also profound symbolism in the very act of obliterating the odious images of Roman political domination and despised heathen religion with Jewish types redolent of freedom and sanctity. 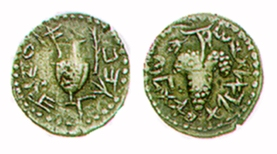 The Shim’on named in the obverse legend on coinage of the Second Revolt is the rebel leader Shimeon ben Kosiba, nicknamed bar Kochba (son of the Star) in recognition of his messianic claims. The papyri found in the desert caves north of Masada confirm that he used the title Nasi Israel, which had formerly been applied to the president of the Sanhedrin and identified bar Kochba as the legitimately constituted civil authority of the rebel Jewish state, as opposed to a mere military commander.

The ancient Jews were a pastoral and agricultural nation whose religion was naturally deeply concerned with the fertility of their land. This coinage thus depicts two major agricultural products, both of which had a long tradition of symbolic significance in Jewish art and literature. The palm tree was associated with life-giving water. It thus became a symbol of fertility and abundance and by extension a symbol of the rich province of Judaea itself. The grape-vine was another ancient symbol of blessing and fertility, often standing for Israel itself in prophetic literature.

The priest Eleazar is also named on the coinage and is presumably the religious counterpart to bar Koebba, that is the High Priest or legitimate spiritual authority of the Jewish people. This office was abolished with the destruction of the Temple, but bar Koebba may have revived it as part of his program of restoration. The man Eleazar is usually identifed with Rabbi Eleazar ben Modilin, an uncle of bar Koebba who was closely associated with him in the revolt. However there are problems with this assumption. One is that no evidence has yet come to light that Eleazar ben Modi’in was a priest. Also, the name of Eleazar disappears from the coinage after the first year, apart from a few hybrids. But Elearar ben Modi’in was at bar Kochba’s side in his stronghold of Bethar until near the end of the war, when he was put to death for suspected collusion with the enemy. 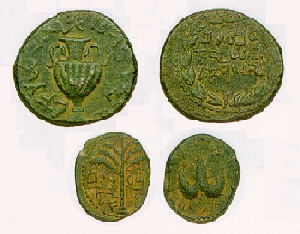 The inexperienced die engravers of the “Eleazar the Priest” bronze issues had obviously mastered neither the basic rules of their craft nor the palaen-Hebrew script. The spoken language of the day was Aramaic, not Hebrew. For patriotic reasons the coinage of both Jewish revolts revived not only the Hebrew language but an obsolete cursive script from the first half of the first millenium BC. It is no wonder, then, that some of the die cutters distorted letter forms or garbled the inscriptions, since they were dealing with what was essentially a foreign tongue.

NOTE: Year Two of the Freedom of Israel Tetradrams often depict an added barrier to the Temple design of the Year One prototype of silver tetradrams. The die cutter put the barrier below the edifice, though in reality this fence stood in front of the Temple. (See M. J. Price and B. L. Trell, “Coins and Their Cities” (1977), p. 177.) Such unrealistic treatment of perspective was rather common in the depiction of architectural scenes on Greek colonial coinage, where it seemed that the inclusion of all the significant elements was, more to be desired than a reproduction of what the eye could actually see from a single vantage point. 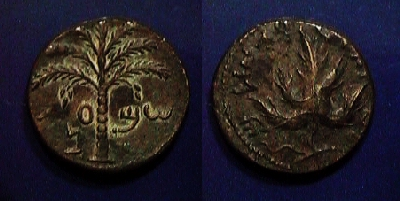 Year One of the Redemption of Israel