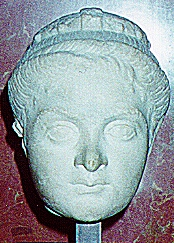 Flavia Maxima Fausta was the daughter of Maximianus. In 307 AD, when she was about seventeen, she was married to Constantine the Great in order to seal his alliance with the regime of her father and her brother,Maxentius, in Rome. On this occasion she was granted the title of Nobilissima Femina the rank which was also borne by Constantine’s mother, Helena. Much later, in 324 AD, both of these ladies received the title ofAugusta, whereupon they were accorded an extensive coinage. Fausta came to a tragic end in 326 AD when she was killed on her husband’s orders after it became known that she had engineered the downfall of her stepson, the Caesar Crispus. Fausta may have falsely accused Crispus of rape in order to make way for her sons, Constantine II, Constantius II and Constans, who ultimately became the heirs to their father’s dynasty.

Fausta’s elevation to the rank of Augusta took place towards the end of 324 AD, and coins in her name were issued from many mints throughout the empire. The series lasted only two years, being terminated by her downfall in September or October of 326. 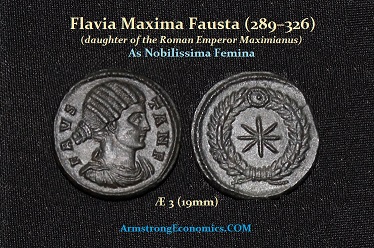