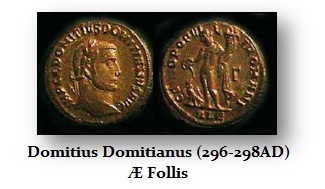 In the year 296 AD, a serious revolt broke out in Upper Egypt, under the leadership of Achilleus. Simultaneously, another revolt broke out in Lower Egypt, where the uprising was directed by Lucius Domitius Domitianus. Confusion has often arisen over these two individuals, and some authorities have mistakenly represented them as one and the same person. The reason for the rebellion would seem to be connected with hardships caused in Egypt by the implementation of Diocletian’s currency reform, a further reason for regarding 296 AD as the date of this measure rather than 294 AD. Domitianus produced an interesting coinage, both in the old style “local” currency, with Greek legends, and the new style folles with Latin inscriptions. Diocletian regarded the rebellion as sufficiently serious to demand his presence in person, and he promptly put an end to the uprising the following year.