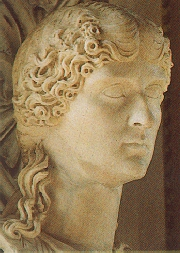 Agrippina was an outspoken woman who could be quite harsh and easily angered. She was unquestionably devoted to her husband and indeed shared his Republican views. This naturally placed her and her husband in a questionable position as far as Livia (Tiberius’ mother, wife of Augustus) was concerned.

It was in 14 AD when Agrippina demonstrated just how much she stood by her husband Germanicus. They were stationed on the northern frontier when the German legions began a mutiny. She remained by her husband’s side until the situation became so dangerous that Germanicus was forced to order her to leave with the children. Her departure so shamed the mutineers that the revolt quickly subsided. It was actually during this campaign when the future EmperorCaligula was born.

During another campaign against the Chatti and Germanic tribes, Agrippina worked personally to prevent panic from spreading among the legions stationed in the encampment on the Rhine. She worked distributing food and clothing among the inhabitants and gained much popularity among the Roman people.

Finally in 17 AD, the Emperor Tiberius sent Germanicus to the East and as usual Agrippina accompanied him along with their children. Germanicus began to attract supporters who openly clashed with the supporters of Tiberius. Eventually, Germanicus died under mysterious circumstances on September 26, 19 AD.

Following the death of Germanicus, Agrippina turned into an avenging, bitter opponent of Tiberius and Livia. She began a campaign of open hostility marching in the funeral of Germanicus held in Rome and publicly accusing Livia and Tiberius of murder. This was perhaps the final breach that would ultimately lead to her own execution.

Agrippina fell victim to the plots of Sejanus, the ambitious Praetorian Prefect. Sejanus pretended to be her friend while all the time intentionally trying escalate the feud between her and Tiberius by telling each that the other was scheming to poison them. To Tiberius, who was innocent of any involvement in her husband’s death, Agrippina appeared to be a relentless and unreasonable woman. She enraged Tiberius when dining with him by accusing him of persecuting her friend, which in fact was being conducted by Sejanus. When Tiberius offered her an apple, she refused to eat it, on the advice of Sejanus who knew it would outrage Tiberius.

Sejanus, who murdered Tiberius’s son Drusus, was systematically planning the isolation of Tiberius and the downfall of Agrippina. He also wanted to eliminate her sons and planned to marryLivilla, daughter of Antonia and wife of Drusus. Thus, through this scheme, Sejanus planned to position himself as the logical heir to Tiberius.

After Livia died in 29 AD, Sejanus began to step up the pace of his scheme. He had begun a judicial attack against Titius Sabinus, a supporter of Agrippina. This evolved into a trial that incriminated Agrippina and her two sons Nero and Drusus, which led to them all being imprisoned. Agrippina was condemned and exiled to the island of Pandateria, where her mother Julia had died in exile. However, before she was sent, Tiberius personally flogged her putting out one of her eyes in the process. Agrippina eventually committed suicide by starving herself to death. 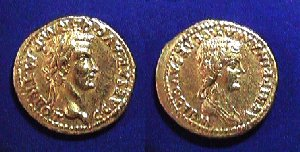 Note: All the coins bearing her name and portrait were struck after her death by Caligula and later by Claudius, Titus and Nerva.