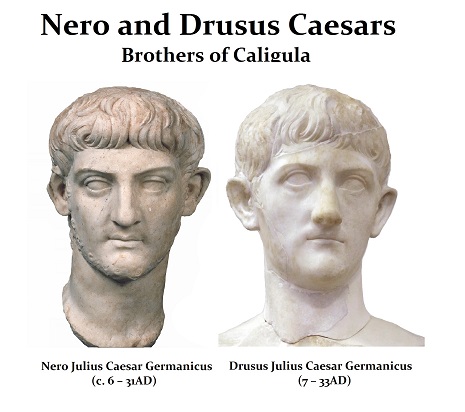 Nero and Drusus Caesars were the brothers of Caligula and the sons of Germanicus and Agrippina the Elder. His father Germanicus, was the heir apparent to his own adoptive father Emperor Tiberius. Nero had two other brothers who died very young, Tiberius and Gaius Julius. They had three sisters, three sisters Agrippina the Younger, Julia Drusilla, and Julia Livilla. Nero Julius Caesar Germanicus (c. 6– 31AD) was the grandchild of Nero Claudius Drusus and Antonia Minor, who was the daughter of Mark Antony and Octavia Minor (Augustis’ sister). His maternal grandparents were Marcus Vipsanius Agrippa and Julia the Elder, daughter of Augustus.

In 20AD, Nero married Julia (daughter of Drusus the Younger), daughter of Livilla and Drusus, known as “Castor” who was Tiberius’ only son by Vipsania Agrippina.

Nero was the oldest adoptive grandson of Tiberius, and was seen as the emperor’s most obvious successor. However, he was accused of treason along with his mother in 29AD. Nero was exiled to the island of Ponza where at some time before October 31 he was either induced to commit suicide or else starved to death.

Nero’s Brother Drusus Caesar, Drusus Julius Caesar Germanicus, (7 – 33AD) married Aemilia Lepida, daughter of Marcus Aemilius Lepidus, who was his second cousin. Tacitus tells us that Aemilia was charged with adultery with a slave in 36AD and committed suicide, “since there was no question about her guilt” (Tacitus, Annals 6.40).

After Livia died in 29 AD, Augustus’ wife and mother of Tiberius, Sejanus began to step up the pace of his scheme. He had begun a judicial attack against Titius Sabinus, a supporter of Agrippina. This evolved into a trial that incriminated Agrippina and her two sons Nero and Drusus, which led to them all being imprisoned. Agrippina was condemned and exiled to the island of Pandateria, where her mother Julia had died in exile. However, before she was sent, Tiberius personally flogged her putting out one of her eyes in the process. Agrippina eventually committed suicide by starving herself to death.

Drusus Caesar was also later accused of plotting against Tiberius and exiled then imprisoned in 30AD, a year after his mother Agrippina the Elder and his brother Nero Caesar were arrested. Drusus was starved to death in prison in 33AD, reduced to chewing the stuffing of his bed (Annals 6.23). 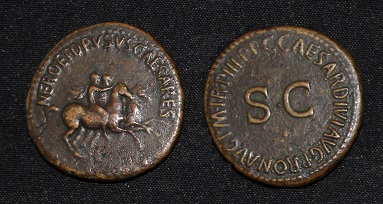