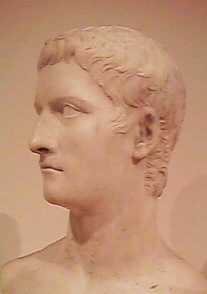 Gaius Caesar Germanicus (Caligula) was the youngest son of Germanicus and Agrippina Senior and was born at Antium in 12AD (modern Anzio) some 25 miles south of Rome. Suetonius tells us that he was a tall, thin man who lost most of his hair on the top of his head and was very pale in color. His nickname, Caligula, was given him by his father’s troops in Germany. He liked to wear a soldier’s uniform, including a half-boot or Caligula, and the troops affectionately called him “Little Boots.”

Caligula’s father Germanicus was the nephew of Tiberius. Before his suspicious death in Antioch in 19AD, Germanicus had won a reputation as a man of distinguished character rising to the level of a popular hero. This great love that the people of Rome held for his father would serve him well following the death of Tiberius.

As a youth, it is said that Caligula developed an improper affection for his sisters Agrippina Jr, Drusilla and Julia Livilla. Caligula somehow managed to escape the fate of his mother and two brothers Nero and Drusus who were accused of plotting against Tiberius by the ambitious Sejanus. By keeping their fate to himself, he won the affections of Tiberius and thus entered the line of succession. At the age of 18, Caligula moved to Capri to live with Tiberius in the royal retreat first constructed by Augustus. It is said that both became quite perverted and Tiberius is reported to have boasted that ‘he was rearing a viper for the Roman people.’ 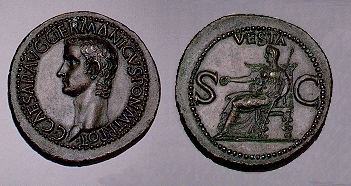 Upon the death of Tiberius on the 16th of March, 37 AD, the commander of the praetorian guard, a man named Macro, insured the smooth succession of Caligula to the imperial throne. The loving memory of his father Germanicus among the people and the Senate insured that Caligula would become the new emperor despite the fact that Tiberius’ Will had named Caligula as co-heir along with much younger Tiberius Gemellus. However, the Senate bestowed the imperial power on Caligula alone, rejecting the provisions of the former Emperor Tiberius. Gemellus thus became the heir to Caligula. 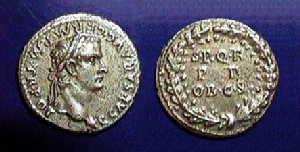 At first, the coinage of Caligula usually portrayed his own portrait along with that of either Augustus, his father Germanicus or his mother Agrippina. This was a political ploy to show his legal right to the throne. This political propaganda would eventually give way during the later part of his reign.

One of the first acts of the new Emperor was to travel to the Pontian islands just off the coast of Italy to bring back the ashes of his mother Agrippina for proper burial in the tomb of Augustus. He made his uncle Claudius(brother of Germanicus) consul and his grandmother Antonia was afforded all the privileges once enjoyed by Livia. With the family restored, all seemed to be going well. 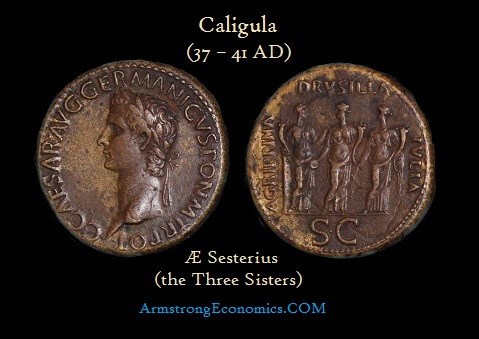 During the first few months of his reign, Caligula ruled with wisdom and clemency, possibly under the tutelage of his grandmother, Antonia. Caligula abolished the treason trials began under Tiberius, gave generous donatives to the people and a handsome bonus to the praetorian guard. But within two months, it is said that Caligula did not get along with Antonia and that she may have been forced to commit suicide on the 1st of May, 37AD.

Six months after becoming ruler of the Roman Empire, Caligula fell seriously ill. Exactly what the illness was is not certain. He had “falling sickness” known today as epilepsy as a youth – an illness shared by Alexander the Great andJulius Caesar. Suetonius tells us that Caligula suffered from insomnia scarcely sleeping three hours at night while being plagued by horrible nightmares. Whatever the illness was, Caligula was afflicted during September and did not recover until late October or perhaps early November.

Following the recovery from his illness, Caligula may have realized that he was emperor, but not indispensable. He accused Gemellus of plotting against him and had him killed. Macro was tricked into giving up the rank of commander of the guard and then forced to commit suicide.

The madness seems to have escalated following the death of his favorite sister, Drusilla on June 10th, 38 AD. It was Drusilla with whom he was accused of being caught in bed with while in his teens by Suetonius. Given the fact that Caligula failed to show any emotion when his mother died yet became very upset upon Drusilla’s death is no doubt the supporting evidence behind the story of incest.

Perhaps the most famous story about Caligula concerns his appointment of a racehorse as a Senator of Roman. The horse lived in luxury being pampered beyond belief. Dinners were held in his honor and he often dined with the emperor in the palace.

Another unbelievable extravagance was the famous incident known as the bridge of boats across the bay of Naples between Bauli to Puteoli. A span of nearly two miles of boats were placed side-by-side upon which a road was built including buildings and rest areas. This elaborate structure served as a stage for a spectacle of only two days. It was reported that Caligula wore the breastplate of Alexander the Great, which he had looted for his personal use. Caligula was also said to have dissolved pearls in vinegar so he could drink wealth.

Such extravaganzas, along with precious gem studded yachts, all combined to steadily drain the treasury by some 3 billion sesterii, an amount which had been left to him by Tiberius. As Caligula discovered the exhausted state of his treasury, his generosity turned into punitive taxation, extortion and confiscation of private assets. He is said to have instituted taxation on prostitutes and opened a brothel within the imperial palace in an attempt to raise funds.

Relations with the Senate began to break down by 39AD. Wealthy senators were forced to buy gladiators at outrageous prices, which was merely an attempt to confiscate funds to cover his previous extravagances. Caligula then accused the Senate of complicity in the executions of Tiberius and those of his mother and brothers (Nero and Drusus). Caligula then dismissed both consuls in September.

The unpopularity was now rising and many began to question the Emperor’s sanity. A conspiracy seems to have emerged involving his two remaining sisters Agrippina Jr. (mother of the future emperor Nero) and Livilla along with Drusilla’s husband, Marcus Aemilius Lepidus. The plot, being discovered, resulted in the banishment of his sisters to the tiny Pontian islands were their mother had died. Lepidus was executed.

Caligula left Rome, to the delight of many, headed north on an intended conquest of Britain, which never materialized. He ordered his troops to the channel and had them gather seashells, which he later claimed were the spoils of war against Neptune.

Upon Caligula’s return to Rome he degenerated even further. He began to view himself as a living God, something which had been common in Asian culture, but not in Rome. He build a temple to himself on the Palatine hill and forced wealth citizens to pay enormous sums to be his high priests. Suetonius tells us that Caligula began to change his attire dressing one day as a man the next as a woman. He would appear often with a golden beard holding a thunderbolt, trident or caduceus – various symbols of the gods. He even dressed at times as Venus and on other occasions in the garb of a victorious general even when there were no victories.

Caligula took four wives almost one after the other. He had first married Junia Claudia back in 33 AD who had soon died in childbirth. His second wife was Livia Orestilla who was engaged to Gaius Calpurnius Piso when Caligula took her in 37AD in the middle of the wedding celebrations. That affair lasted only two months before casting her aside. In 38 AD, his third wife was Lollia Paulina who was also quickly divorced. His fourth and final wife was not so lucky. She was Milonia Caesonia and several years his senior. She was married to Caligula in the summer of 39 AD. Caesonia had lived with Caligula as his mistress and a month after their marriage a daughter was born named Julia Drusilla in memory of his beloved sister.

By the year 40 AD, the insanity, personal depravity and oppression of the Senate had become too much. Another plot was discovered resulting in the execution of several senators. But support for Caligula was vanishing everywhere. Finally, a wider plot developed with the principal players Cassius Chaerea and Cornelius Sabinus, Arrecinus Clemens, commander of the guard, the palace secretary Callistus, several senators and additional members of the praetorian guard. The assassination took place on January 24th, 41 AD. Chaerea slashed Caligula’s throat from behind followed by Sabinus striking a blow into the chest causing him to fall to the ground where the others jumped in delivering some thirty blows. The conspirators quickly moved to the palace killing Caesaonia and her daughter Julia Drusilla in hopes of ending the monarchy. But the German imperial bodyguard were ready to plunge the city into a general massacre as they hunted down the assassins. The Senate tried to muster support to retake power, but failed to gain the support of the praetorian guard. As the story goes, upon the discovery of Caligula’s uncle Claudius hiding behind the curtains in the palace, he was hailed emperor by the soldiers thus ending the Senate’s move to restore the Republic.

Caligula’s body was taken in secret by Herod Agrippa of Jewish history where part of his body was cremated on the Esquiline Hill. The remaining portions of his body were later cremated by his two surviving sisters Agrippina and Livilla upon their return to Rome from exile. His ashes were eventually deposited in the Mausoleum of Augustus.

The hatred for Caligula ran deep. His name was erased from many public inscriptions, his statues pulled down and destroyed and his coinage recalled and melted whenever possible. 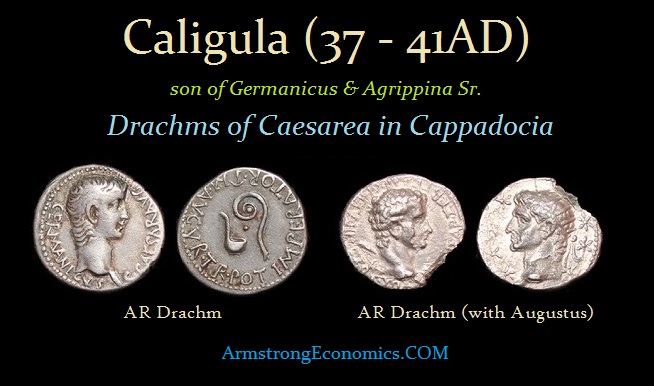 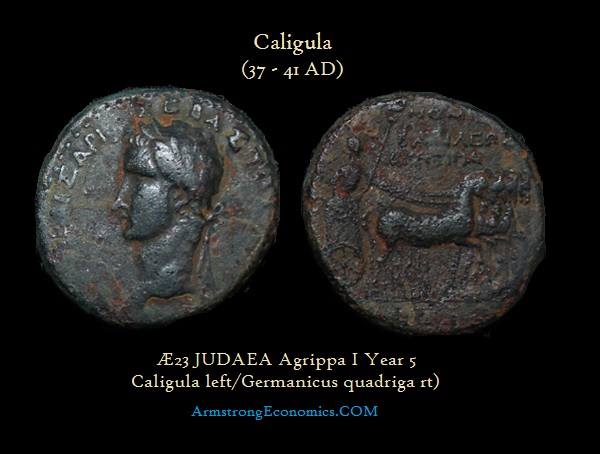