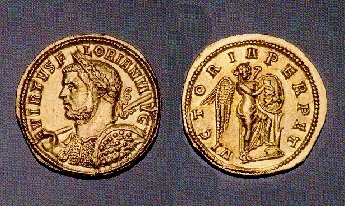 Marcus Annins Florianus is said to have been the half-brother of Tacitus and upon his death, Florianus, Prefect of the Praetorian Guard at the time, assumed the throne with the support of the Senate. Florianus immediately set out to deal with the troublesome tribe of the Heruli. While on the verge of victory, the Eastern provinces declared their commander, Probus, emperor. Florianus broke off his attack and marched south to confront this new usurper.

While Florianus’ legions clearly outnumbered those of Probus. The two armies met near Tarsus in Cilicia, but Florianus’ European troops were soon ravaged by disease and the harsh climate compared to that of Europe. For some strange reason, Probus’ soldiers managed to convince some of Florianus’ officers to support their commander against their own. With the summer heat being extremely strong at the time, perhaps the men preferred the easy way out rather than a full confrontation. Florianus was murdered by his own troops leaving Probus victorious and the new undisputed emperor of Rome. Florianus’ reign was a mere 88 days. He had become the third emperor to be murdered in less than one year.