Marcus Aurelius Mausaeus Carausius was a man of humble origin who came from Menapia, an area in Belgium. Nevertheless, he rose through the ranks due to a distinguished career. Carausius gained much fame for his military skills during in the campaigns under Emperor Maximianus (286-305AD) against the Franks and the Bagaudae in 286 AD under Amandus (285-286AD). Maximianus was in need of a competent officer who could defeat the Frank and Saxon pirates that had plagued the Channel. Maximianus chose Carausius for the job and appointed him commander of the British Channel Fleet.

Carausius proved himself to be a brilliant admiral but was accused by Maximianus of keeping recovered plunder for his personal use as well as pressing captured pirates into service in his own fleet. Maximianus thus sentenced Carausius to death. Given his prospects for the future, Carausius set sail for Britain in late 286 or early 287 AD. Upon his arrival, Carausius declared himself independent of imperial control. 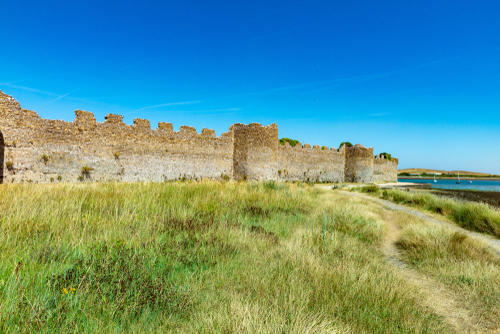 The Britons greeted him with open arms and immediately began a campaign to consolidate his new found power. Carausius quickly seized significant portions of the Gallic coast back on the continent. He also constructed a defense fort along the English coast based upon the design above. Today, the fort at Portchester is the finest surviving Roman fort.

Carausius had several years to make preparations. However, the inevitable finally came during April of 289AD when Maximianus marched against this new rebel. Carausius proved his military skill once again and delivered Maximianus a crushing defeat and forced the emperor into a humiliating treaty.

The first coinage issues of Carausius were a bit irregular, often with crude designs. Die cutting was not a typical occupation in Britain. After all, London had not previously served as a major Roman mint. Early coinage was also quite crude and hastily executed quite often being overstruck on coins of previous emperors. Nonetheless, when Carausius declared his triumph in typical Roman fashion, it included the minting of coinage to advertise his victory. 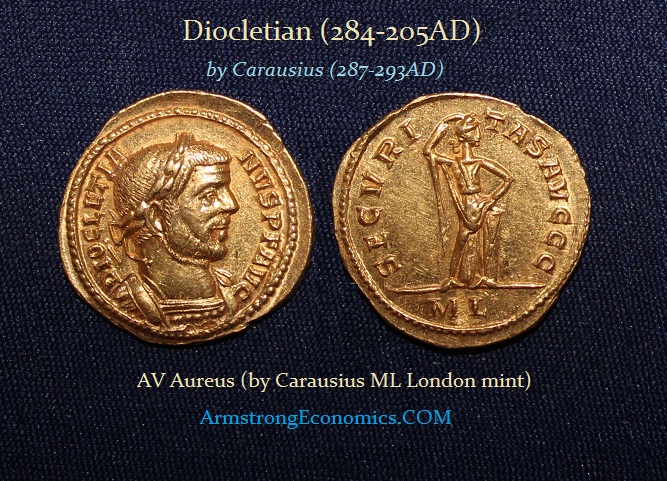 We find an exceptionally rare gold aureus with the portrait of Diocletian with the London mintmark “ML” reflecting that any usurpation was still tentative. He may have attempted to placate Diocletian at this time for Maximianus was raise to the rank of c0-emperor on April 1st, 286AD. This coin is UNIQUE and the only such specimen to have survived. This indicates that the issue may have been a matter of just weeks before Carausius made his decision to then present himself as a third emperor after Maximianus is raised to the rank of co-emperor. This, the aureus must have been issued following the defeat of Amandus and prior to April 1st, 286AD when Maximianus becomes co-emperor. The above illustration represents perhaps the first gold coin minted in Britain since the birth of Christ. 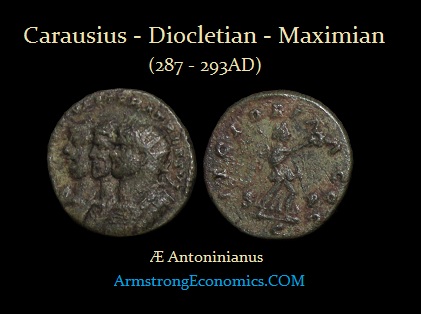 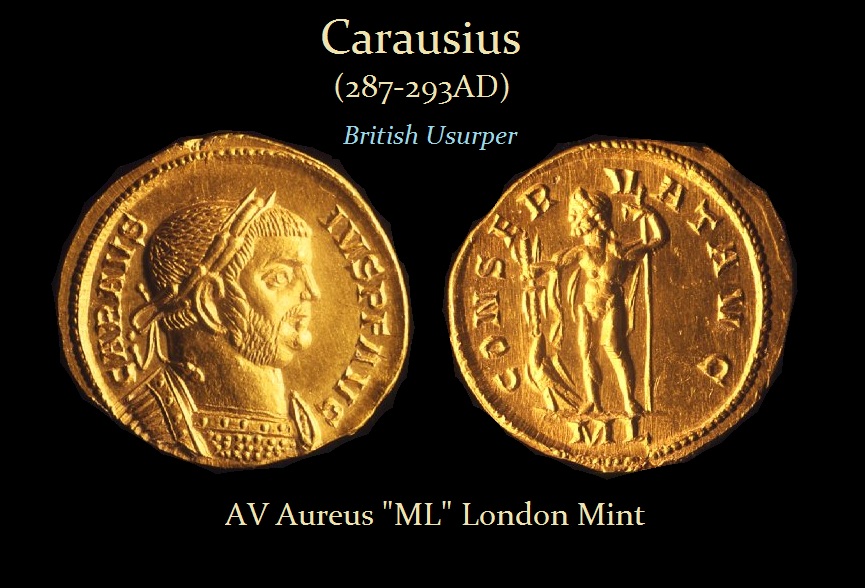 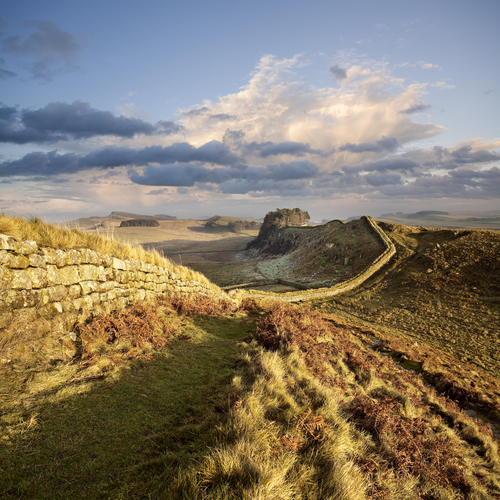 Carausius began acting like a Roman Emperor. We can see that his first coins have the same basic design and fabric with the ML mintmark as the issue he struck in the name of Diocletian. He began to issue coinage in his own name abandoning both Diocletian and Maximianus proudly displaying the “ML” mint mark for London. His separatist movement was welcome for it actually came cyclically 13 years after the Gallic Empire of Postumus came to an end in 273AD. Carausius held power for seven years, fashioning the name “Emperor of the North” reflecting no intention of invading Rome to take the entire empire. Thus, Carausius’ movement was a separatist event that was welcome following the lawless atmosphere under Amandus which raided and pillaged Roman settlement.

Carausius appears to have issued coins confirming he is in agreement with the military (CONCORDIA MILITVM). It may be that Carausius was the general on land in Britain who put down an uprising in 285AD which resulted in Diocletian receiving the title Britannicus Maximus. Whatever the case, He clearly had the support of the legions in Britain. Additionally, one of the most common reverse types on his coinage declares there is now peace (PAX AVG). As with all Romans, the reverse types of Carausius’ coinage served as sophisticated propaganda and declare various events. Carausius went about reforming his new empire.

Carausius resisted the incursions of the Picts, repaired Hadrian’s Wall and kept the regions generally secure. He is also believed to have established forts along the coast of the channel which were reorganized by the Saxons centuries later. Despite his best efforts at trying to win favor in Rome, Carausius’ administration was still viewed as nothing more than a lawless rebellion. Previously, Carausius had the responsibility of eliminating the Frankish and Saxon pirates who had been raiding the coasts of Armorica and Belgica. He was suspected of keeping the treasure the pirates had taken for himself and allowed the pirates to carry out raids before taking action against them. In this manner, Carausius built up a reserve to fund his rebellion. This is why Maximianus had ordered his execution. 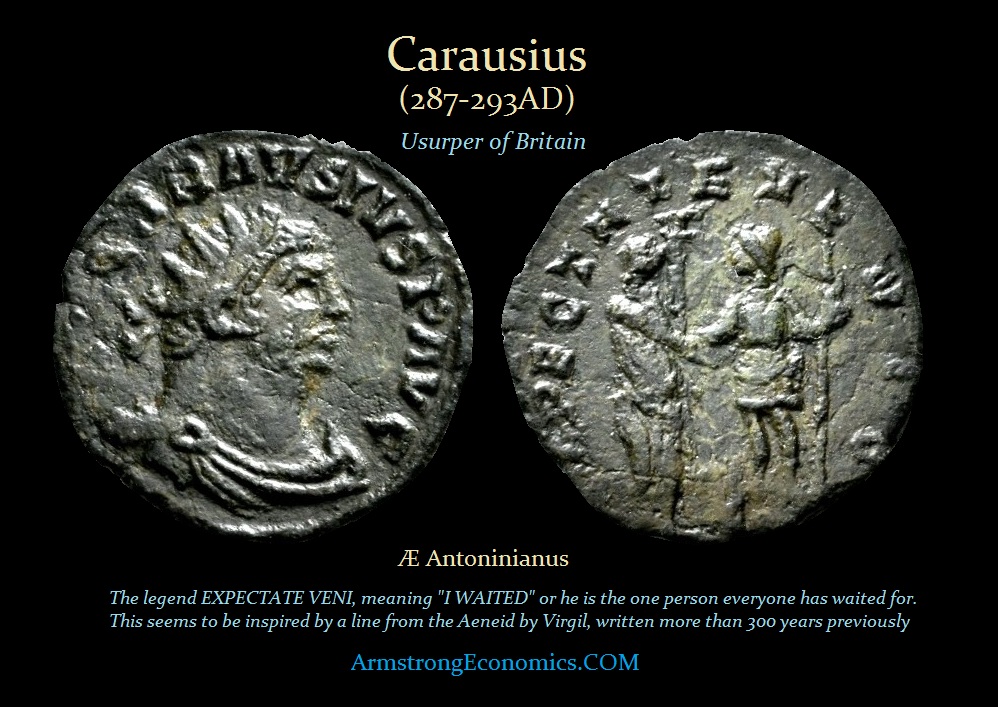 Nonetheless, Carausius issued the silver coinage to enhance his legitimacy and create the image that his separatist movement was more successful than Diocletian and Maximianus. Some of these silver coins bear the legend Expectate Veni, meaning “I WAITED” or he is the one person everyone has waited for. This seems to be inspired by a line from the Aeneid by Virgil, written more than 300 years previously. 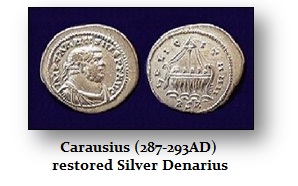 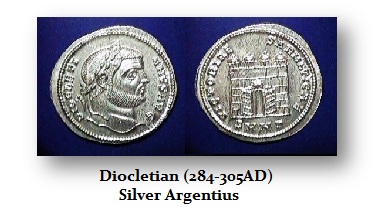 Carausius’ monetary reform is most interesting and it clearly established that he was attempting to restore the stability of the rule of law in Britain. Carausius issued a silver denarius similar in size, weight, and fineness to that of Nero. However, the antoninianus was still made of bronze. It made no sense to issue the denarius in silver unless its value was inherently higher than the antoninianus. This raises the distinct possibility that old silver denarii were in fact still used to some extent and possessed a higher “street” value within society.

In fact, Carausius introduced silver coinage which was the first silver coins to appear in the Roman Empire before the capture of Valerian I by the Persians in 260AD. When Helene Huvelin conducted her study of the coinage of Carausius, there were 26 gold aurei, 350 silver denarii, and some 7,000 bronze antoniniani known at that time. The restoration of the silver denarius perhaps begins about 288AD but it ends in 293AD. His successor, Alectus (293-296AD) issued no silver coinage whatsoever.

Nevertheless, the issue of silver coinage of Carausius did manage to eventually inspire Diocletian to follow with the introduction of the silver argenteus in 294AD after the defeat of Carausius’ separatist movement. Diocletian was determined to destroy Carausius and regain the territory particularly in the face of the humiliating treaty entered into by Maximianus. However, the reintroduction of silver coinage in Britain certainly created the image that he was the more successful emperor.

Finally, in 293AD, the co-emperor Constantius I (Chlorus) (305-306AD), Diocletian’s junior partner in the Tetrarchy, launched a major attack against Carausius‘ territory in Gaul. Constantius blockaded the port of Gesoriacum (Boulogne) and prepared to lay siege. The city fell by a narrow victory. Constantius encountered great difficulty in trying to retake Gaul, but eventually, the entire region was recaptured. Meanwhile, Carausius’ main fleet remained in Britain in preparation for what he knew would be a full-scale invasion of Britain itself. This humiliating loss of Gaul caused numerous political difficulties in Britain. His chief finance minister, Allectus, sought to exploit the political opportunity. Allectus plotted against his leader out of ambition and murdered Carausius in 293AD. Allectus proclaimed himself the new Emperor, but he would eventually be killed when Constantius invaded Britain. This gold medal celebrates Constantius I entering London and being hailed as a liberator. Thus ended the Separatist Movement of Carausius.

NOTE: The identity of the C (sometimes CL) mint, which struck for Carausius and Allectus, is still a matter of considerable dispute. Camulodunum (Colehester) was believed to be the most likely choice. However, on the south coast there was another stronghold of importance – Clausentum (Bitterne). Clausentum was used as a base by the Channel Fleet in defense of Britain. This lends considerable weight to this alternative attribution for the “C” mint mark given the fact that mints were normally associated with military concentrations. There does remain yet a third possibility for this mysterious mint – Glevum (Gloucester). However, if this attribution were correct, then the mint mark would most likely read “G” or “OL.” The strongest candidate is the city of Clausentum since this mint, unlike London, did not survive the defeat of the rebel state. To date, no gold coins have been discovered with this mint mark.

London mint marks are “ML” and are found on most denominations. Such mint marks thus identify coins of Carausius and Allectus as among the first British coins minted during the Roman era.

It has also been argued that “RSR” is not a mint mark but rather the mark of an official, the “Rationalis Summae Rei” who was in residence at Carausius’ capital, London (Allectus). Additional reasons for the attribution of the denarius coinage to the capital are the existence of a unique aureus with the mark RSR, and the stylistic similarity between the denani and the London billon. While an interesting argument, style may not be an important factor. It is also possible that die cutters were few and as such could have been concentrated within the capital with dies then being shipped to the other mints. It has also been argued by Guy de la Bedoyere that RSR means “Redeunt Saturnia Regna” suggesting a return to the Golden Age.

One of the most remarkable innovations of Carausius’ interesting coinage was the reintroduction of good quality silver denari similar to that of Diocletian’s currency reform, which began in 286 AD. The reverse legend proclaims “the Roman Revival,” implying that Carausius himself was far better suited than Maximianus to lead the Roman people into better times. However, what is much more interesting is the fact that Diocletian introduced a silver denarius and NOT a silver antoninianus. Late 3rd century hoards often contain very worn early denarii of Septimius Severus or earlier. Legal documents often still quoted specific prices in terms of denarii. Early 4th-century legal documents often specifically state “silver denarii” making a distinction from the obvious debased currency of the late 3rd century period. Carausius’ introduction of the silver denarius may , in fact,result from a defacto two-tier monetary system, which quite possibly emerged. In other words, Gresham’s law was most likely at work during 3rd century Rome. The hoards of debased currency drove out the older silver denarii from normal daily circulation. However, these old silver denarii perhaps reentered circulation at a premium to that of the current debased issues. If this were the case, it would make sense that Carausius would attempt to strike a silver denarius equal in value to the old silver denarii. Therefore, the silver denarius issued by Carausius is a multiple denominations of the debased bronze antoninianus. 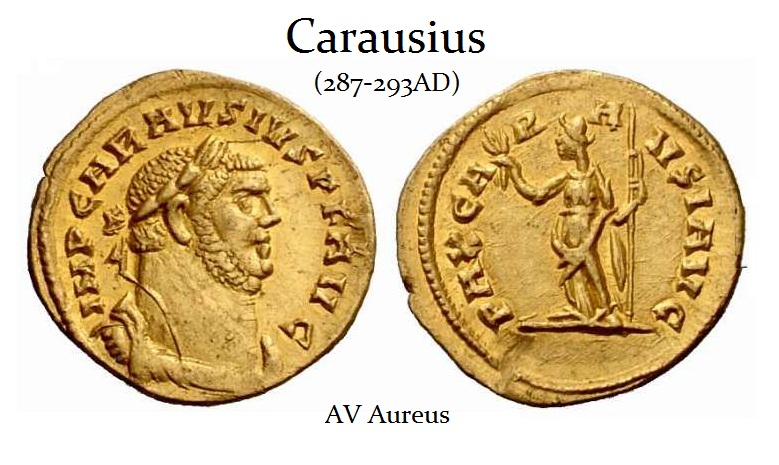