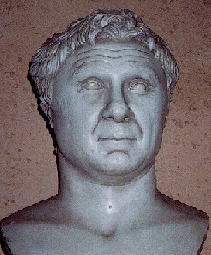 GNAEUS POMPEIUS MAGNUS (Pompey the Great) was Rome’s most famous general during the later period of the Republic. He was the son of Pompeius Strabo who was born in 106 BC. Pompey was married several times. Finally, during his third marriage to Mucia, his two sons were born – Gnaeus Junior and Sextus.

When Pompey was only 17 years old, he served in the military campaign during the Social War (90-88 BC) when the whole of Italy rose up against the dominance of Roman power. Pompey fought on the side of Sulla against the Marius in 83 BC upon Sulla’s return to Italy following the Mithradatic War. Pompey’s brilliant skills were largely responsible for Sulla’s victory over the army of the Marian Party. However, it was his successful campaign in Africa in 81 BC, when Pompey was given the surname “MAGNUS” (the Great).

Marius had been an uneducated man of humble origins. His rise to the rank of senator was previously unprecedented. Lacking noble heritage, Marius was a man of the people and not the favorite of the Senate. Thus the conflict between Sulla and Marius was perhaps the first warning signs that the Republic would eventually fall from its own internal political corruption.

Following his African campaign, Pompey led a victorious five-year campaign against the Marian leader, Sertorius, in Spain which came to an end in 71 BC. Pompey also claimed credit for the final victory over the embarrassing slave revolt led by the slave Spartacus, despite the fact that the battle had actually been won by Marcus Licinius Crassus. Pompey was then appointed Consul in 70 BC. Following his Consulship appointment, Pompey set out to wipe out the pirates that had been dominating the Mediterranean Sea. Pompey managed to accomplish this task in only three months during 67 BC.

By 66 BC, Pompey took command of the Roman army from Licinius Lucullus, whose spectacular victories over Mithradates were viewed too slow in coming for the impatient Senators. Under Pompey’s command, he brought the Third Mithradatic War (74-65 BC) to a glorious victory, whereupon he then annexed Syria and Palestine adding them both to the Roman Empire.

Pompey reached a level of such power through his military accomplishments that he almost assumed dictatorial powers that had been granted to him by the Senate for the conduct of the Mithradatic War. However, Pompey set aside these powers, and returned to Rome where, in 60 BC, he formed an alliance with Julius Caesar and Marcus Crassus.

In 60 BC the alliance between Pompey the Great, Julius Caesar and Marcus Licinius Crassus became known as the “First Triumvirate” thus setting the stage for what would eventually become the birth of the Roman imperial government. Pompey married Caesar’s daughter, Julia in 59 BC, with the intent that this would strengthen the bond between these two men since they had been on opposite sides during the war between Marius and Sulla. Crassus had also supported Sulla against Marius but Crassus had been saved by Caesar during the Catiline affair. Crassus had shared a consulship with Pompey during which the two men argued almost constantly. Crassus also never forgave Pompey for stealing the glory for the defeat of Spartacus. Thus it was a political partnership very much designed by Caesar. Shortly thereafter, Caesar departed from Rome to assume the conquest of Gaul (59-49 BC), leaving Pompey and Crassus in charge of administration in the capital city.

Unfortunately, the bonds between Pompey and Caesar were not altogether that strong and Julia proved to be the great mediator. Unfortunately, Julia died in 54 BC while in childbirth. Crassus was killed in 53 BC, while undertaking an expedition into Mesopotamia against the Parthians. With both Julia and Crassus gone, there was little to prevent these two men from drifting apart. While Caesar’s conquest of Gaul was starting to rival Pompey’s past victories, Pompey was getting jealous at losing his place of honor in military history. The corrupt Senate of Rome also sought to exploit the situation by undermining the alliance between Caesar and Pompey in order to retain their privileged institution through which their vast trade monopolies were maintained.

Pompey was named sole Consul in 53 BC, thus usurping Caesar’s Consulship. In 52 BC, Caesar was confronted by a major rebellion in Gaul during which time Pompey sought to take advantage of the situation. Pompey allied himself with the Senatorial Party in direct opposition to Caesar who had been aligned with the Democratic Party (the Populares) which had opposed the Senatorial nobility since the days of Marius. Pompey, now supported by the Senate, was the acknowledged military and political leader of Rome. On January 1st, 49 BC, the Senate ordered Caesar to give up his command in Gaul, and return to Rome as a private citizen. Caesar had little choice and marched into Italy. Upon crossing the Rubicon, Caesar’s words accurately described the situation – “the die is cast!”

Civil war was now unavoidable. Caesar gathered his army and crossed the Rubicon River which formed the border between his province and mainland Italy and proceeded to march toward Rome. Pompey had miscalculated Caesar’s resolve, skills and intelligence. The majority of the Senate was now terrified realizing that they had gone too far. Pompey hastily mobilized his army and fled across the Adriatic Sea with the majority of senators. Caesar entered Rome without any resistance. Pompey set about building an army in Greece for the inevitable clash with Caesar. But Caesar instead moved on to Spain quickly removing his enemies and any of Pompey’s supporters. Caesar was no fool. His move into Spain was unexpected by Pompey. After protecting his rear, Caesar then returned to Italy and sailed across the Adriatic to confront Pompey’s still unprepared army. In a decisive battle at Pharsalus in Thessaly on August 9, 48 BC, Pompey was utterly defeated. The once great general of Rome retreated on a ship bound for Egypt where he had hoped to find sanctuary. Upon his arrival in Egypt, Pompey was brutally slain by order of Ptolemy, King of Egypt. Pompey was no match for the brilliant Julius Caesar. Pompey’s greatness was in confrontation – not in strategy and long-term planning. Thus the once Pompey the Great ended pleading for his life in Egypt only to have his head handed over to Caesar upon his arrival.

Note: Commemorative coinage was issued by Pompey’s sons Cnaeus Junior and Sextus as they mounted armies against Caesar in the aftermath of their father’s death. These commemorative issues were more intended to rally political support for the cause than honoring their father’s death. The Roman bronze As, which had traditionally displayed the two-face head of Janus took on the likeness of Pompey the Great. Their father’s portrait also appeared on several types of denarii and on the reverse of the gold aureus of Sextus.