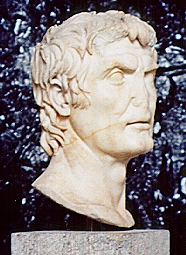 LUCIUS CORNELIUS SULLA began his career serving as Quaestor, a judge of criminal cases and State Treasurer. In 107 BC, while serving underGeneral Gaius Marius (155-86 B.C.), Sulla captured Jugurtha in the Jugurthine War. In the period 104-101 BC, there were two great hordes of barbarians, the Teutones and Cimbri, who began to migrate southward towards Italy. Sulla aided Marius in evicting the barbarians, at which time Marius was hailed as “Rome’s Deliverer.”

Marius was growing very old and his political prestige began to decline. During the “Social War” (90-88 BC), Marius sought to regain some of his lost political prestige by accomplishing some early military successes in 90 BC. However, the younger, Sulla surpassed his “mentor” during the conflict and as such rose in political stature.

In 88 BC, Sulla was elected CONSUL by the Senate and was given the command of the legions instead of Marius in the war against Mithradates VI, The Great, the most celebrated of the line of Kings of Pontus (the first Mithradatic War 88-84 BC). After Sulla’s departure from Rome, but before he left Italy, Marius conspired with members of the Senate to have the command transferred to himself. This began the open breach between Marius and Sulla that would lead to political discord.

Sulla, upon hearing the news that Marius had stolen his command, returned to Rome with his army and defeated Marius’ supporters. Marius was forced to flee the city during the purge. However, while Sulla was occupied by the Mithradatic War, Marius once again returned to Rome and after his own reign of terror, in which he disposed most of Sulla’s supporters and confiscated their property, was appointed to his seventh Consulship. Marius died a few weeks after his appointment as Consul, but his Marian Party was again left in control of Rome.

While Marius and his party were taking control of Rome, Sulla was engaged in a long siege of Athens, which had been a supporter of Mithradates VI. Athens fell and Sulla took the city in 86 BC. After defeating Archelaus, one of Mithradates’ Generals, Sulla then left Greece and crossed the Hellespont, whereupon he secured a peace with Mithradates VI in 84 BC. Later, Mithradates successfully repelled Nicomedes, forcing his armies to flee back to Bithynia. Mithradates subsequently massacred 80,000 Romans who still lived within his kingdom for supporting Nicomedes’ invasion. News of the massacre resulted in the second Mithradatic War (83-82 BC), which ended in the reduction of all of Mithradates VI’s Asian holdings. Control of these regions passed to the Roman commander Flavius Fimbria. The third Mithradatic War (74-65 BC) ended Mithradates’ pressure on Bithynia, and after his retreat, his son, Mithradates VII, turned against him and attacked his father’s army. Mithradates committed suicide in 63 BC.

When Sulla returned with his army to Rome, he was received triumphantly for his great military success in Greece. However, upon discovering the brutality of Marius and his party members while he was fighting Mithradates, Sulla retaliated by promptly proscribing the Marian Party and their property, and declaring himself Dictator in 82 BC.

After Sulla’s reign of terror against the Marians and their supporters, Sulla set about rebuilding the influence of of the Senate, which had lost considerable prestige, influence and members over the previous 50 years. Sulla used his Dictatorial powers for to rebuild the Senate which had traditionally been the old boy’s club for the nobility. Sulla restored the Senate’s right to sit on juries to try provincial governors on extortion charges. He limited the powers of Tribunes, the popular leaders elected by the people. He also created a number of permanent courts, each under the presidency of a Praetor.

Sulla retired from active government life in 79 BC. He was a well respected and able general, well versed politician, and respected statesman. However, when he died in 78 BC, he left many enemies. His most notable enemy was none other than Julius Caesar of whom Sulla had warned that there were “many Marius” in that man.

Note: Portraits of Sulla never appeared on his coinage. The traditional design incorporated the helmeted bust of Roma.