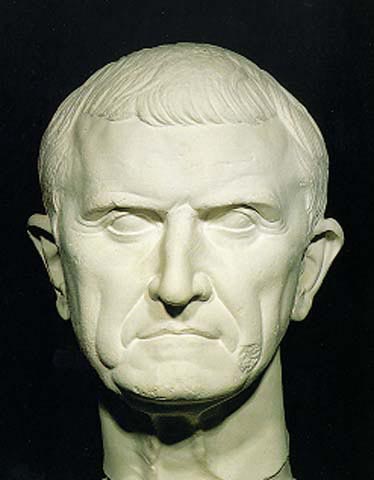 Marcus Licinius Crassus is best remembered by history as the third member of the First Triumvirate along with Caesar and Pompey. Crassus was indeed a leading figure in the final days of the Roman Republic who played a key role in transforming history. Crassus was known as one of the wealthiest men in Rome. His family had long been involved in politics, and his father served as consul in 97 BCbefore entering into conflict with Marius in his struggle with Sulla. This conflict resulted in the father’s death in 87 BC.

The young Marcus Licinius Crassus had been sent off to Spain to insure his safety. Following his father’s death, Crassus immediately returned to Rome and joined the supporters of Sulla. His loyalty to Sulla was rewarded when large amounts of confiscated property fell under his control when Sulla became the dictator of Rome. He continued his accumulation of wealth and rose in political power as a result. His primary source of wealth came from his estates, from the slave trade and from silver mines. Political strength came from his contacts and popularity that had been carefully developed over the years.

Crassus became praetor, earning eventually a proconsular position over several legions. In 72 BC, a slave revolt broke out lead by perhaps the most famous of all slaves in history – Spartacus. Crassus took the field against Spartacus and won a major victory for which Pompey received the credit.

Crassus worked quietly against Pompey regarding his rise to power with great caution. Despite this sense of doubt, Crassus served in theconsulship of 70 BCwith Pompey. They argued and debated almost every issue resulting in their term together virtually useless with nothing much on their list of accomplishments. Crassus did finance a huge festival with 10,000 tables for the citizens during his office, but not much else was worth recording.

In 63 BC it was the Catiline affair which gripped all of Rome in a scandal. Many officials of note fell. Crassus had himself served with Catiline in the censorship and even he too came under suspicion for a time. But Crassus was saved from political disaster by Julius Caesar. It was Caesar who desired to build an alliance against the corruption that had consumed the Senate. With Crassus and Pompey bitterly opposed to one another, Caesar sought a political partnership between the three notable men.

In 60 BC, Crassus agreed to join what would become known as the First Triumvirate with Pompey and Caesar. Each shared all the full benefits of the state. Crassus found his situation basically unchanged. Pompey, who always lacked true intellect, was gradually being influenced by the senate while Caesar was conquering Gaul. In 56 BC, a meeting was held at Luca where their partnership was to be discussed. Crassus, it was decided, would share a consulship again with Pompey, and Caesar would remain in Gaul to finish his conquest. For Crassus, he was still the rich boy who lacked glory compared to Pompey and Caesar. Crassus attempted to establish himself militarily and demanded the territory of Syria. Even though he was 60 years old and deaf in one ear, Crassus put together an army and prepared for the invasion of Parthia. Despite two years of meticulous planning, Crassus’ attempt at military glory proved to be one of the worst disasters ever inflicted upon the Roman army.

In 53 BC, in the middle of the desert of Mesopotamia, near a town called Carrhae, Crassus allowed his troops to be surrounded by the Parthians. The Parthians showered the Roman army with arrows. In the blistering sun, Crassus’ army disappeared. Plutarch reported that a Parthian named Pomaxarthres killed Crassus himself while Dio wrote that Crassus died at the hands of one of his men in order to avoid capture. Nonetheless, the head and right hand of Crassus were sent to King Orodes of Parthia. Reportedly, Orodes poured molten gold into Crassus’ mouth, saying: “Satisfy yourself with the metal for which in life you were so greedy.” 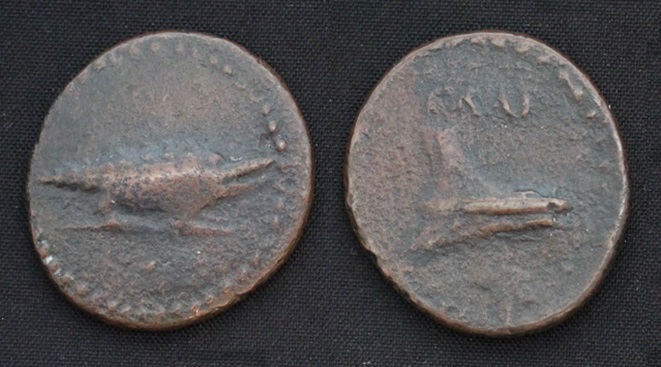 AE As Crocodile facing right, “CRAS” above prow of a ship right (RPC 914)