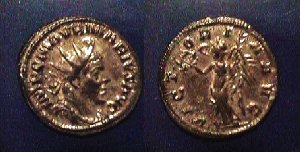 Marcus Aurelius Marius was a blacksmith by trade. Marius was one of the “Thirty Tyrants” named inHistoria Augusta during the late 3rd century AD. He apparently joined the Roman army and rose through its ranks to reach the elevated status of an officer. Following the death of the Gallic Emperor Postumus, Marius seized the Gallic throne but was murdered by his own soldiers after a very brief reign. Romantic stories about him like to claim that he was killed by a sword of his own manufacture. It is also said that his reign was a merely a few days. However, based upon the extent of his coinage, it is more likely that his reign was perhaps one or two months.