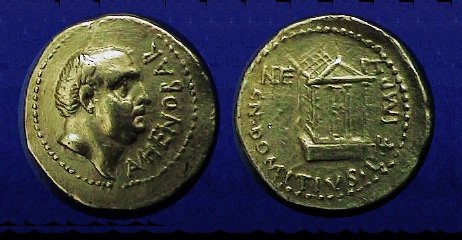 Gnaeus Domitius Ahenobarbus (died 31 BC) Gnaeus had been a supporter of Pompey who fought at Pharsalus and was subsequently pardoned by Caesar. He then sided with the so-called republicans after Caesar’s assassination serving among the supporters of Brutus. In return for his loyalty, Brutus appointed Ahenobarbus commander of a fleet in the Ionian Sea. He subsequently won a great naval victory over Cn. Domitius Calvinus on the first day of the battle of Philippi, thus preventing the Caesarian troops from departing the harbor at Brundisium. For this achievement, Ahenobarbus was saluted Imperator.

Ahenobarbus appears to have turned to piracy as an occupation. Yet he was skillful at switching sides in politics when it suited him. Eventually, Ahenobarbus was reconciled in 40 BC with Marc Antony, who made him governor of Bithynia. Ahenobarbus then managed to become consul in 32 BC and fled in support of Antony when conflict began to erupt with Octavian. Amazingly, Ahenobarbus deserted Antony switching back to Octavian claiming his disapproval of Antony’s alliance with Cleopatra. Ahenobarbus eventually died before the battle of Actium.

The aurei and denarii struck by Gn. Domitius Ahenobarbus was of only one commission on his own authority. Inasmuch as the types appear to be personal, the issue is presumed to belong to the period between the battle of Philippi and the reconciliation with Antony, when he was raiding the shores of lonia as a freelance pirate. The portrait on the obverse has been read by some as a depiction of the imperator himself, but a very different portrait appears on denarii of the same issue, suggesting that both portraits, or at least one, may depict some ancestor who cannot now be precisely identified. It has been suggested that the portrait on the aureus is that of Gn. Domitius Ahenobarbus, consul of 192 and legate to L. Scipio in the war against Antiochus the Great two years later. This same Cn. Domitius may be the one who erected the temple of Neptune commemorated on the reverse of the aureus; it stood in the circus of Plaminius and contained an important sculptural group by Scopas according to Pliny (Hist. Nat., XXXVI, 26). The legend suggests that the Domitius Ahenobarbus may have repaired or refurbished the temple in gratitude for his victory over Domitius Calvinus at Brundisium, which is symbolized by the denarius reverse of the same issue. However, it is difficult to imagine how this could have been accomplished with Roman finances in the hands of Octavian at that time.