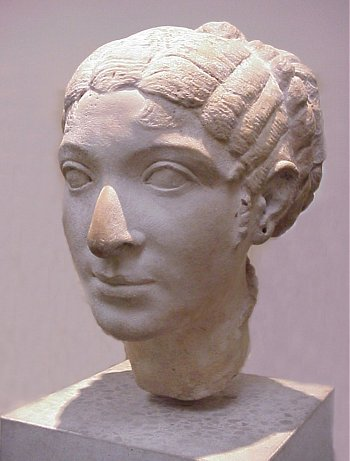 Cleopatra VII was the eldest surviving daughter of Ptolemy XII Neos Dionysos(Auletes=”flute player”) and Cleopatra VI. Her father was the son of the popular Ptolemy IX and his Greek Alexandrian concubine. Ptolemy XII was a weak and feable man who had fled to the court of Mithradates VI of Pontos following his father’s death. Only after the mob stormed the palace and killed Ptolemy XI for the murder of Berenike in 80 BC, did her father return to Alexandria to take the throne of Egypt.

Cleopatra was born in 69 BC in Alexandria. She may have had two older sisters, one named Cleopatra who perhaps died as a child and Berenike who may have been beheaded by her father. She also had a younger sister, Arsinoe IV. Cleopatra VIII also had two younger brothers, Ptolemy XIII and Ptolemy XIV.

Ptolemy XII was indeed a weak ruler. The power or Rome was rising and instead of mounting a challenge, Ptolemy XII become a subservient ruler of Egypt under the Roman Empire.

Upon the death of Ptolemy XII in the spring of 51 BC, the kingdom was left to his eighteen year old daughter, Cleopatra VII, and her younger brother Ptolemy XIII who was now only twelve years old at the time. The will set forth that Rome was the guardian of his children

As a young girl growing up in the palace of Alexandria, Cleopatra learned well the art of court intrigue. She also appears to have developed a loathing for her ambitious brother Ptolemy XIII. In 51 BC, Auletes died, leaving Cleopatra and Ptolemy XIII as co-rulers of Egypt. Cleopatra was only 17 years old when she became Queen of the Nile kingdom. Almost immediately, a feud began and with the aid of his mercenary advisors, Ptolemy expelled Cleopatra from the throne. Had he killed his sister perhaps history would have been completely different. But expelling Cleopatra would one day prove fatal not merely to her brother, but also to the political world of Rome.

Cleopatra bore Caesar a son who tradition holds was named Caesarion. Cleopatra then traveled to Rome where she remained in a separate house until Caesar’s assassination in 44 BC. Cleopatra was not popular among the citizens of Rome. In the aftermath of Caesar’s death, she fled back to Egypt. She remained outside of Roman politics until she met Marc Antony in Cilicia. She then worked her charm again and the two became lovers of legendary proportions. More than a mere love story, her association and love affair with Mark Antony has been memorialized in inscriptions and documented by numerous coinage issues baring their portraits conjoined together.

Antony was financed by Cleopatra. This immense wealth is evident in the legionary denariithat have survived issued to pay the legions of Antony’s army. But even with such financial support, Antony could not win the battle of ACTIUM. Cleopatra’s premature retreat from the battle had an impact on the outcome. Cleopatra sailed off to Alexandria, where Antony followed as a pandering lover. Trying to salvage her realm, she negotiated with Octavianbut to no avail. Antony killed himself. After failing to win Octavian’s affection, Cleopatra joined her lover in one of the most celebrated suicides in history. She died at the age of 39; her desires and ambitions proved the undoing of Marc Antony, the death of the Roman Republic and ensured the supremacy of Augustus and the birth of Imperial Rome. In her death, the line of the Ptolemies that had stretched back to the age of Alexander the Great came to an end. Egypt was seized and became just another Roman province. As for Caesarian, he was reportedly killed by Octavian. Marc Anotony and Cleopatra did leave a heir – a daughter. She was married to Juba II of Mauratania. 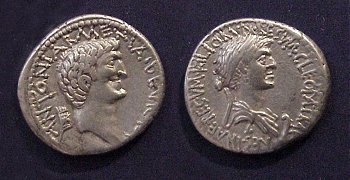 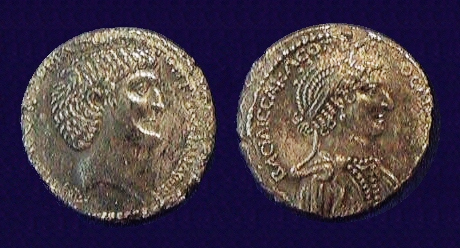