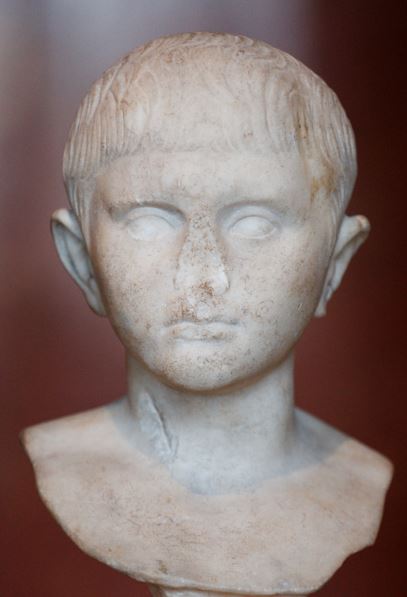 Gaius Caesar was the oldest son of Augustus’ daughter Julia from her second marriage to Marcus Agrippa. His younger brothers were named Lucius and Agrippa Postumus. Gaius and Lucius were destined by Augustus to succeed him, since

Augustus himself lacked a son. Both boys were adopted by Augustus as his own children in 17 BC. There is historical evidence which documents that Augustus was extremely fond of his grandsons. A letter written by Augustus to Gaius while he was in Syria in 1 AD, demonstrates an incredible warmth on Augustus’s part that he felt for the young prince.

Augustus very much wanted to keep the heir to what he had built within the Julian blood-line. At first, he refused to even consider Livia’s sons from her previous marriage, Tiberius and Drusus, who were of the Claudian blood-line. Other than a baby born prematurely, his marriage to Livia produced no children. Augustus’ only child was his daughter, Julia, by his previous marriage to Scribonia. Any dynastic plans that Augustus had for the future must therefore depended upon the children of Julia.

In 25 BC Augustus married Julia to Marcellus, the son of his sister Octavia. Marcellus originally offered hope to Augustus but at the time of his marriage to Julia he was still in his late teens. In 23 BC, Marcellus died suddenly and as such Augustus turned to Agrippa, his long-time friend.

In 21 BC, Agrippa divorced his wife at the request of Augustus in preparation for his marriage to the widow Julia. Despite the fact that Agrippa was 25 years her senior, the marriage succeeded in producing three sons and two daughters. The eldest was Gaius, born in 20 BC and Lucius followed three years later. Agrippa retained the position of heir-apparent but Augustus’ adoption of the boys in 17 BC clearly demonstrated his plans for the future.

Agrippa died in 12 BC, leaving Julia widowed for the second time and pregnant. She gave birth to a third son Agrippa Postumus later in 12 BC. Only following the death of Agrippa did Augustus begin to turn an eye toward the sons of Livia. Realizing that the two young princes needed a guardian should he himself die, Augustus decided to have the eldest son of Livia, Tiberius, marry his daughter Julia. Tiberius was compelled to divorce his present wife Vipsania (daughter of Agrippa by the latter’s first marriage), whom he apparently loved very much. The wedding took place on February 12th, 11 BC.

While the two young princes were quite popular with the people, they had also been quite spoiled by Augustus. This became quite evident in their arrogant attitude. In order to shock them back to reality, Augustus wanted to grant the tribuniciam power for five years to Tiberius, but he refused to get caught up in the middle of the family battle. Instead, Tiberius sought to retire to Rhodes being very unhappy with his life in general and in particular with his marriage to Julia.

Gaius was made consul in the year 1 AD and was sent on a mission to Syria with the authority to reassert Roman rule over Armenia. Lucius took ill quite suddenly and died at Marseilles in 2 AD. In 3 AD, Gaius was wounded during a siege. He became quite ill and set out to return to Rome. By the time he had reached Turkey, his condition became worse. He died at Limyra on the 21st of February during the year 4 AD. Rumors have persisted that both deaths were the work of poison on the part of Livia (Augustus’ wife) who had her own designs of creating a Claudian dynasty. Agrippa Postumus had been banished by Augustus perhaps on false charges. Nevertheless, he was immediately murdered by perhaps on the orders of Livia at the time her son Tiberius came to the trone after the death of Augustus.

Note: While it has been argued that this coinage does not display the portrait of Gaius, but instead a youthful portrait of Augustus, the fact that the obverse inscription clearly states CAESAR tends to imply that such an argument is not correct. Given the extreme pride that Augustus felt toward Gaius, it is unlikely that this portrait is anything but an image of his heir apparent.