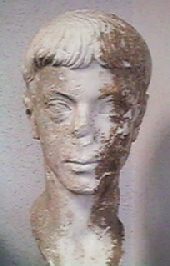 In 2 BC, Lucius received the title Princeps Juventutius one year after his older brother Gaius. This was in fact Augustus’ sign to his court that both Gaius and Lucius were his legal heirs to the throne. Along with this title the boys were given the honor of dedicating all buildings in Rome.

In 2 AD, Lucius departed Rome destined for Spain. He was to join the legions in Spain to begin his military training. Lucius never made it to Spain. He died of a sudden illness along the way at Massilia. Gaius died two years later giving rise to rumors that Livia, wife of Augustus, had a hand in their deaths in order to make way for her own son, Tiberius, to become the heir to Augustus.