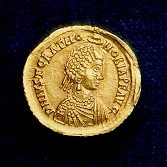 Justa Grata Honoria was the daughter of Constantius III and Galla Placidia, which made her the granddaughter of Theodosius I. Honoria was given the rank of Augusta by her brother Valentinian III in the Western Roman Empire. Honoria gained a reputation with older historians of being ambitious and promiscuous, using her sexuality to advance her interests. Her brother decided to marry Honoria to a Roman senator named Bassus Herculanus who would not use his position to claim the throne. Honoria did not want any part of this idea and sought the aid of Attila the Hun. She sent him a plea for help with her ring in the spring of 450AD. Attlia saw this as a proposal for marriage and agreed demanding half of the western Empire as her dowry. When Valentinian discovered the plan, he wanted to execute her, but only on the plea of his mother, he banished her to exile. He also wrote to Attila denying the legitimacy of the supposed marriage proposal She died shortly before the murder of her brother by Petronius Maximus in 455AD. 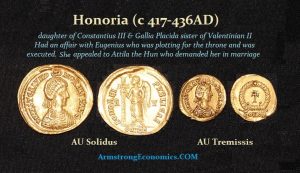 The only coinage known of Honoria is that of the traditional gold denominations of the later Roman period. No silver or bronze denominations have been discovered to date.