March-May 455 AD
Emperor in the West

Flavius Anicius Petronius Maximus became on of the most prominent Senators in Rome under the reign of Honorius. Petronius was of noble birth coming from one of the great senatorial families in Rome – the Anicii. Petronius was a very ambitious man and he made his bid for supreme power in 455 AD. Already in his sixtieth year (born 395 AD), Petronius headed a conspiracy which led to the assassination of Valentinian III in Rome on March 16, 455 AD. Petronius was proclaimed Emperor the following day.

Petronius felt vulnerable in the aftermath of his plot. In order to help legitimize his position, he forced Valentinian’s widow, Licinia Eudoxia to marry him. Thus Licinia was forced to marry her husband’s murderer. This political move outraged many. Licinia wrote to Gaiseric, the Vandal King in Carthage, North Africa, to plead for him to overthrow Petronius. Gaiseric was happy to help and in the process, he planned to sack Rome. With an attack from North Africa on the horizon, Petronius tried to flee Rome. As he was on his way out of the city, he was attacked by a mob of citizens and killed on May 31st, 455 AD after a reign of scarcely more than two months. 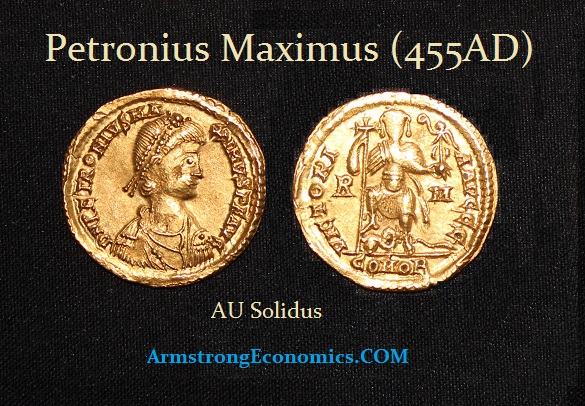 Coinage of this Emperor is quite rare given his short reign. The only denomination known to date is that of the gold solidus. No silver, bronze or less gold denominations have been discovered.