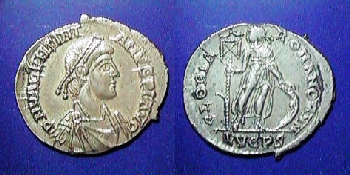 Placidius Valentinian III was born in 419 AD the son of Constantius III and Galla Placidia. Placidia fled from the court of Honorus at Ravenna in 423 AD when her half-brother began to take an interest in her. She took her children to the court of Arcadius, her other half-brother in Constantinople. Eventually, her son Valentinian III was married to the daughter of Theodosius II, Licinia Eudoxia which thus marked him as the heir to the Western throne.

Following the death of Honorus and the defeat of the usurper Johannes, Placidia took her son back to Italy where he was proclaimed emperor with the scantion of Constantinople on October 23rd, 425 AD. For the first 12 years of Valantinian III’s reign, his mother Placidia ruled the Western division of the Empire as regent. Thereafter, the control of government passed from her hands to that of the general Aetius who maintained control until his assassination in 454 AD.

Valantinian III’s primary interests in life were sports, religion and seducing other men’s wives, and if he had perhaps restricted himself to those simple pastimes his reign might have been more successful.

Under Valentinian’s reign, the Western Empire continued to decay. His greatest disaster was the loss of Africa to the Vandals. In 451 AD, Attila the Hun invaded Gaul, but his competant general Aetius and his Visigothic allies proved victories over the Huns at the famous battle of Mauriacus.

Perhaps Valentinian’s greatest political mistake was the murder of his most successful general, Aetius in 454 AD. This was the crowning stupidity of the Theodosian dynasty, and resulted in his own assassination six months later by the ambitious senator Petronius Maximus.