Fortunately, Gallus was generally in poor health as a child, which was why he was passed over during the Palace Massacre of 337 AD following the death of Constantine. In total, nine descendants of Theodora, step-mother of Constantine, were murdered by the sons of Constantine in a bid to keep the throne within their side of the family.

Gallus married the widow Constantia, daughter of Constantine the Great. Her husband had not been so lucky, for he was murdered during the Palace Massacre. He was then raised to the rank of Caesar in March, 351 AD and at the same time his name was changed to Constantius. Gallus was made Governor of the eastern provinces and took up his residence at Antioch. However, Gallus was an evil ruler whose edicts were so harsh and oppressive that his subjects complained to the Emperor. His wife, Constantia, was said to have aided him in his crimes. Constantius IIthereupon wrote to Gallus, requesting his presence in Milan, and had him arrested while on the journey. Constantia set out to defend her husband but died during the journey. At Pola, in Istria, Gallus was tried, condemned and put to death during the winter of 354 AD. 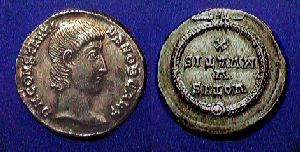