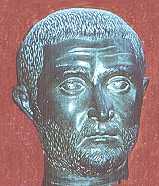 C. Vibius Trebonianus Gallus was born about 206 AD at Perugia in Italy. He was a Senator, had served as Consul and was Governor of Upper Moesia beginning around 250 AD. Trebonianus Gallus served in the army holding a high rank and playing a leading role in the Danube wars under Trajan Decius. Following Decius’s death in a trap set by the Goths, Gallus assumed the rank of Augustus. It is not known as to how or why, but Gallus adopted Decius’ younger son Hostilianus. It might have been due to pressure from the troops, but Hostialianus, still in Rome and too young to rule, was appointed joint Emperor. Gallus’s own son, Volusianus, was given the rank of Caesar.

Gallus’ first act was to conclude a peace with the Goths, but on terms which many in Rome felt to be disgraceful and would serve only to encourage future aggression on the part of the Goths. Gallus agreed to the Goths retaining all the booty and roman captives they had won. In addition, Gallus agreed to pay the Goths an annual tribute.

The reign of Gallus was a troubled period beset with invasions on both the Northern frontier by the Goths (emerging from southern Russia into Greece & Turkey) and on the Eastern frontiers by the Persians who overran Syria capturing the city of Antioch – the third largest city in the Roman Empire at that time. Things were merely worsened by a devastating plague that swept the empire taking even the life of the joint-Emperor, Hostilian. But at least here, Gallus won praise of the people by ensuring a proper burial for everyone including the poor.

The Goths soon broke their treaty with Gallus and began to invade Roman Territory on the lower Danube. In 252 AD, Aemilius Aemilianus , the Governor of Upper Moesia, inflicted a severe defeat on the Goths and was immediately proclaimed Emperor by his troops. The following year Aemilianus invaded Italy, forcing Gallus to muster his troops in defense of his reign. By August 253 AD, Aemilianus had reached within 50 miles of Rome itself. Support for Gallus collapsed and he with his son Volusian were both murdered by their own soldiers.

NOTE: The obverse types for double aurei, antoniniani and dupondii are all radiate bust right, and for all other denominations, laureate bust facing right. The bust is normally depicted draped and wearing a cuirass, although often the cuirass may be very faint and on some specimens completely missing. 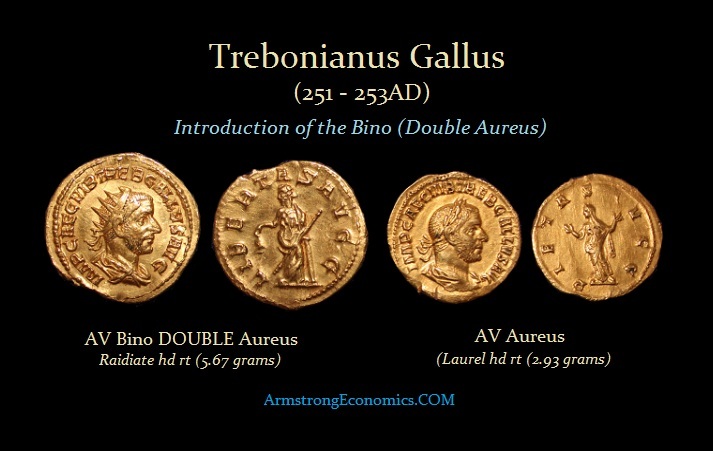 Monetary Reform became necessary by the time Gallus came to power due to persistent inflationary pressures. Gallus reformed the gold coinage by reducing the weight of the aureus from 66.5 grains to 55.2 grains. This denomination was distinguished by his laureate portrait. A Double Aureus (Bino) was also struck with a radiate crowned bust weighing on average 90.5 grains. Many numismatists merely argue that the relationship between these two coins cannot be certain. However, based upon the radiate crown tradition being used to distinguish double denominations in bronze (established by Nero for the dupondius) and the double denominations of gold and silver issued by Caracalla, such arguments hold little attraction or logic. As to the relationships to other denominations, it is safe to assume that nothing changed and in fact this monetary reform marked a reduction in weight for the gold coinage in an effort to keep pace with the drastic reduction in fineness for the silver coinage since the time of Nero.

Additionally, there appears to be a near perfect double weight issue of Antoninianus averaging 6.85 grms compared to the normal weight for this period of 3.70 grams. Heavy antoninianus are known from the time of Philip I, but such weights are only a 50% increase over and above normal issues. From the time of Trebonianus Gallus into as late as Valerian II, near perfect DOUBLE weight antoninianii appear. This at least suggests that there is a potential for such issues to be regarded as DOUBLE Antoninianii. This appears likely given the fact that just prior to Gallus taking the throne, the introduction of a DOUBLE sestertius was made by Trajan Decius. Clearly, the inflationary pressures at this point in the monetary history of Rome were significant thus lending support to the fact that double antoninianii would have been economically feasible to introduce.