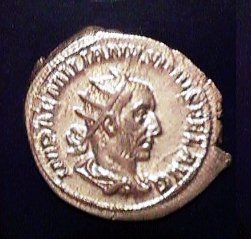 Marcus Aemilius Aemilianus was born about 207 AD on the island of Jerba off the coast of Tunisia where he came from an insignificant family. Aemilian was a senator, ex-consul and had been governor of Moesia Inferior where he assumed command in 252 AD. Aemilian’s rise to power came when Kniva, chief of the Goths, demanded an increase in tribute from the Romans. Aemilian rebelled against the Goths’ demands and lead a successful campaigne against them along the Danube. His troops were then solidly behind him and proclaimed Aemilian Emperor and his wife, Cornelia Supera, was given the rank of Augusta. Aemilian and his legions then began a march on Italy where they easily overtook Trebonianus Gallus, who was murdered by his own troops.

Aemilian was thus proclaimed Emperor by the Senate of Rome. Unfortunately, the general of the Rhine legions,Valerian, also began his march of Rome initially being summoned for help by the Emperor Trebonianus Gallus.

As an Emperor, Aemilian tried to rule as a general rather than as a supreme ruler. Nonetheless, Aemilian failed to hold the support of his troops when his rival marched on Rome. Valerian was proclaimed Emperor by his troops following the murder of Gallus. Aemilianus advanced to meet Valerian, but he was murdered by his own men as well after a reign of only 88 days. The location where he was killed was known thereafter as the “Pons Sanguinarius”, (the Bridge of Blood). His murder then left Valerian the new master of the Roman World.

Note: The obverse portrait style for antoniniani and dupondii is radiate, draped bust wearing a cuirass facing right. All other denominations show a portrait style of laurate bust right draped and cuirassed. 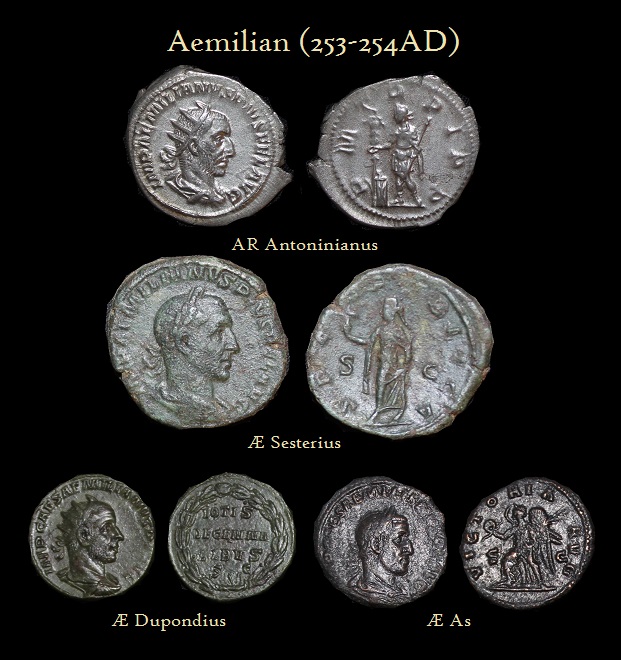