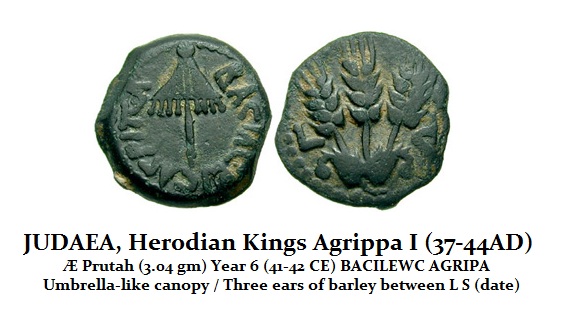 Herod Agrippa I (born 11BC; ruled 41 – 44 AD) after Jesus was crucified. Agrippa I was the last King of Judea with the royal title reigning over Judea. He was also the father of Herod Agrippa II, who was the last King from the Herodian dynasty. Herod Agrippa I  was the grandson of Herod the Great and son of Aristobulus IV and Berenice. He was born Marcus Julius Agrippa being named in honor of Roman general and statesman Marcus Vipsanius Agrippa, who had been the right hand of Emperor Augustus. Herod Agrippa I is the king named Herod in the Acts of the Apostles 12:1 (Acts 12:1). The Jewish historian Josephus refers to him as “Agrippa the Great”.

Josephus tells us that, following the murder of his father, Herod Agrippa I was sent to the imperial court in Rome. There, Emperor Tiberius became very fond of him and he was educated alongside his own son Drusus. He also became a close friend of the future Emperors, Caligula, and Claudius. Because of debts, Agrippa left Romae and when back to Judaea. There Agrippa quarreled with Herod Antipas, and he once again fled to Syria. Soon thereafter, he was convicted, through the information of his brother Aristobulus, once again he had to flee. This time he was arrested as he was about to sail for Italy. His wife succeeded in obtaining money from Alexander the Alabarch.

Finally, Agrippa made it back to Rome and was favorably received by Tiberius, who then entrusted him with the education of his grandson Tiberius Gemellus. He also formed an intimacy with Caligula. Agrippa was one day overheard by his freedman Eutyches expressing a wish for Tiberius’s death and the advancement of Caligula. Tiberius had him arrested and thrown into prison. Following Tiberius’ death and the ascension Caligula in 37AD to the throne, Agrippa was set free and given the title of king of the territories of Abila along with Gaulanitis, Auranitis, Batanaea, and Trachonitis, which his uncle Herod Philip the Tetrarch had held. Agrippa was also awarded the ornamenta praetoria and could use the title amicus caesaris (“friend of Caesar”). Caligula also presented him with a gold chain equal in weight to the iron one he had worn in prison. He then returned to Jerusalem.

In 39AD, Agrippa returned to Rome and brought about the banishment of his uncle, Herod Antipas. Agrippa then was granted his uncle’s tetrarchy as well. Now he had Galilee and Peraea creating the Jewish kingdom. Yet the assassination of Caligula in 41AD, Agrippa was appeared to have been involved in the struggle over the accession between Claudius, the Praetorian Guard, and the Senate. The historian Cassius Dio simply writes that Agrippa cooperated with Claudius in seeking rule. Josephus suggests that in The Antiquities of the Jews, that Agrippa’s role was critical to the ascension of Claudius to stand up to the Senate. After becoming Emperor, Claudius gave Agrippa dominion over Judea and Samaria and granted him the ornamenta consularia, and at his request gave the kingdom of Chalcis in Lebanon went to Agrippa’s brother Herod of Chalcis. Consequently, Agrippa became one of the most powerful kings of the east. His domain virtually restored the Jewish Empire that had been held by his grandfather Herod the Great.

While the Christian writers said Agrippa’s was the result of being eaten by worms, there really does not seem to be any support for that claim. He was considered a good ruler who was more respectful than others. He was also raised in Rome so he was not demanding of just the Jewish faith. The Jewish historian Josephus, in his Antiquities 19.8.2 343-361 wrote:

“Now when Agrippa had reigned three years over all Judea he came to the city Caesarea, which was formerly called Strato’s Tower; and there he exhibited spectacles in honor of Caesar, for whose well-being he’d been informed that a certain festival was being celebrated. At this festival a great number were gathered together of the principal persons of dignity of his province. On the second day of the spectacles he put on a garment made wholly of silver, of a truly wonderful texture, and came into the theater early in the morning. There the silver of his garment, being illuminated by the fresh reflection of the sun’s rays, shone out in a wonderful manner, and was so resplendent as to spread awe over those that looked intently upon him. Presently his flatterers cried out, one from one place, and another from another, (though not for his good) that he was a god; and they added, “Be thou merciful to us; for although we have hitherto reverenced thee only as a man, yet shall we henceforth own thee as superior to mortal nature.” Upon this the king neither rebuked them nor rejected their impious flattery. But he shortly afterward looked up and saw an owl sitting on a certain rope over his head, and immediately understood that this bird was the messenger of ill tidings, just as it had once been the messenger of good tidings to him; and fell into the deepest sorrow. A severe pain arose in his belly, striking with a most violent intensity. He therefore looked upon his friends, and said, “I, whom you call a god, am commanded presently to depart this life; while Providence thus reproves the lying words you just now said to me; and I, who was by you called immortal, am immediately to be hurried away by death. But I am bound to accept what Providence allots, as it pleases God; for we have by no means lived ill, but in a splendid and happy manner.” When he had said this, his pain became violent. Accordingly he was carried into the palace, and the rumor went abroad everywhere that he would certainly die soon. The multitude sat in sackcloth, men, women and children, after the law of their country, and besought God for the king’s recovery. All places were also full of mourning and lamentation. Now the king rested in a high chamber, and as he saw them below lying prostrate on the ground he could not keep himself from weeping. And when he had been quite worn out by the pain in his belly for five days, he departed this life, being in the fifty-fourth year of his age and in the seventh year of his reign. He ruled four years under Caius Caesar, three of them were over Philip’s tetrarchy only, and on the fourth that of Herod was added to it; and he reigned, besides those, three years under Claudius Caesar, during which time he had Judea added to his lands, as well as Samaria and Cesarea. The revenues that he received out of them were very great, no less than twelve millions of drachmae. But he borrowed great sums from others, for he was so very liberal that his expenses exceeded his incomes, and his generosity was boundless.”

On the coins minted by him, he carefully avoided placing any symbols which could offend the people’s religious sentiment.