Son of Emperor Theodosius I

Flavius Honorius was the younger son of Theodosius I and Aelia Flaccilla. Honorius was born in 384 AD and was raised to the rank of Augustus in 393 AD. Upon the death of his father Theodosius in 395, the Empire was divided in two with Honorius receiving the throne of the Western division of the Empire while his brother Arcadius succeeded to the throne in the East. Like his brother, Honorius inherited none of his father’s abilities. The real power rested in the hands of his guardian Stilicho, whose daughter, Maria, he married in 395 AD.

Stilicho cared little for improving the Empire but was instead obsessed with trying to gain control of the Eastern division for himself. He interfered in the internal affairs at court in Constantinople and ordered assassinations all in an attempt gain control of the East. The result of his obsession was to allow the defenses on the Northern frontier to decline.

On November 18th, 401AD, Honorius moved the capital from Rome to the Milan area at the city of Ravenna. This was a marshy area in Italy which would prove to be easily defended. This would ultimately become the seat of power in the West even for the Gothic hoards who eventually inherited the Western provinces following their collapse.

On the last day of the year 406 AD, a huge group of Gothic barbarian tribes gathered along the Rhine. The Alamanni, Alans, Burgundians, Vandals and assorted allies poured into Roman territory burning and destroying settlements from Gaul down to Spain.

Stilicho proved ineffective and was caught off guard. He failed to strike any successful countermeasures and soon found himself with Alaric, King of the Visigoths 395-410 AD, demanding tribute from Honorius. As the provinces became unstable, usurpers began to surface, some on their own and others as puppets of the Visigoths. In Britain, Constantine III was proclaimed Emperor by his troops and he invaded Gaul. In Spain, the barbarians put up Maximus as Emperor, who was later pardoned by Honorius. In Gaul the barbarians set up another puppet Emperor Jovinus. Honorius’ brilliant countermeasure was to have Stilicho executed. This merely cleared the way for the Visigoths who eventually captured Rome itself in 410 AD taking Galla Placidia, Honorius’ sister, hostage.

Another puppet Emperor was set up by the Visigoths in Rome itself – Priscus Attalus. However, Alaric died shortly after sacking Rome, which was perhaps the only fortunate event Honorius may have experienced. Constantius III, who one day would become Emperor himself, was an able general who Honorius wisely selected to replace Stilicho. At last, a defense could to mounted and Constantius III would score a victory over Alaric’s successor, his brother Athaulf.

Athaulf led his army over the Alps and into Southern Gaul taking his puppet Emperors, Attuls and Galla Placidia, with him where he confronted the barbarian puppet Emperor Jovinus. After negotiating with both, Athaulf sided with Honorius, captured Sebastianus, Jovinus‘ brother, and eventually prevailed over Jovinus executing them both.

Athaulf married Galla Placidia in 414 AD and seemed no longer content to ravage the countryside. He then attempted a reconciliation with Honorius, but there seemed to be no deal to be had. War broke out as a result and Athaulf faced Constantius III who blockaded the coast of Gaul laying waste to much of the countryside in the process. Attalus was captured and Athaulf was assassinated by a group of barbarians seeking revenge for his murder of their chieftain.

Constantius III died in 421 AD and Galla Placidia fled to the East away from her brother Honorius’ sexual advances. Galla took her children as well thus fleeing to the court of Theodosius II at Constantinople. This left Honorius alone and without an heir since his marriage to Maria produced no children as was the case with his second marriage to Maria’s sister, Thermantia. Honorius died on August 15th, 423 AD with one of the most incompetent records of any Roman Emperor to date. 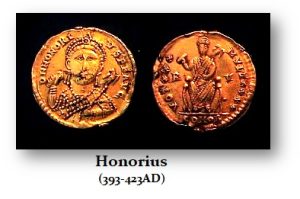