(M. Aurelius Probus). Born at Sirmium in 232 AD, Probus adopted the profession of arms and gained rapid promotion until, by the reign of Aurelian, he had become one of the leading generals of the Empire. Soon after the death of Tacitus he was proclaimed emperor by his troops and, following the murder of Florianus, he became undisputed master of the Roman world. 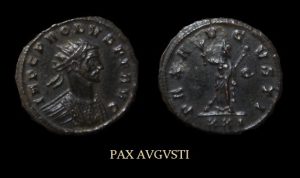 His reign was notable not only for his considerable military successes, but also for his attempt to restore the economic life of the Empire. On of the themes on his coinage was PAX (Peace). To this end he introduced viticulture into several of the western provinces, and had he been able to carry out all his plans the Roman State might have recovered much of its ancient power and prestige. However, in the autumn of 282 AD he was murdered at Sirmium by a band of mutinous soldiers who were enraged at having been employed on public works instead of military duties.