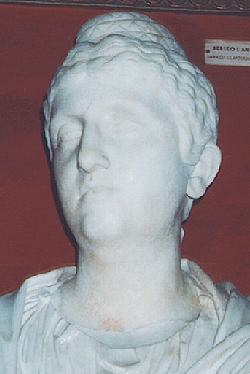 Faustina Senior was the wife of Antoninus Pius. They were married before his accession in 110 AD. Faustina was the daughter of the Consul Marcus Annius Verus and Rupilla Faustina. She was born in Rome prior to the reign of Trajan.

Faustina bore four children, two sons and two daughters. Her two sons, Marcus Galerius and Marcus Aurelius Fulvius, died prior to their father’s accession to the throne. Her eldest daughter, Aurelia Fadilla, was married to Lamia Syllanus, but she had also died prior to 138 AD. Her only surviving daughter, Annia Galeria Faustina (Junior), married the future emperor Marcus Aurelius. 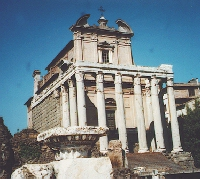 Faustina’s reputation was not altogether pleasant. Her husband went to some lengths in order to stop the rumors. Nonetheless, when she died in 140 AD, Antininous Pius consecrated her in 141 AD. He also issued a very extensive series of commemorative coinage in her memory as well as the dedication of the Temple of Faustina he had erected in the heart of the Forum. 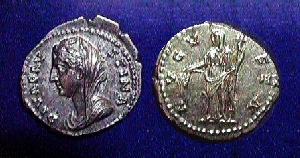 The Posthumus Coinage of Faustina 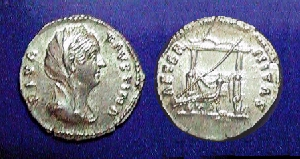 NOTE:The postumous coinage of Faustina is perhaps the most extensive within the entire roman series insofar as types and varieties are concern. It is rivaled only by the postumous issues of her daughter and Augustus.