Julius Nepos was the son of the Magister Militum, Nepotianus. His mother was the sister of the semi-independent Magister Militum of Dalmatia, Marcellinus. Julius became the heir to Marcellinus receiving his post in Dalmatia. He married into the royal family by taking the niece of Aelia Verina (Empress and wife of Leo I) as his wife.

Following the beheading of the Western Emperor Anthemius, the general Ricimer installed another puppet on the throne, Olybrius in 472 AD. However, both Ricimer and Olybrius died in late 472 AD leaving the throne vacant for more than four months. Finally, Ricimer’s successor, his son Gundobad, installed Glycerius as his puppet to the throne of the West. The Eastern Emperor Leo I refused to recognize Glycerius’ claim and commanded Julius Nepos to invade the West and dethrone Glycerius, which he accomplished in June, 474 AD after Gundobad deserted his candidate Glycerius. Julius allowed Glycerius to live but forced him to become Bishop of Salona.

Julius Nepos was duly proclaimed Emperor of the West and once more two Augusti reigned in unison. Julius made the mistake of appointing Orestes to Magister Militum (Master of Soldiers). Orestes had originally come from Pannonia and worked for Attila the Hun as his secretary. In the summer of 475 AD, however, the barbarian troops in Italy were incited to rebellion by Orestes and Nepos was forced to flee from Rome to Ravenna. On August 28th the now fugitive Emperor Nepos, left Italy for Dalmatia where he remained as an Emperor in exile until his death five years later.

The throne of the West was usurped by Orestes for his son Romulus Augustus. The strange custom of maintaining an Emperor controlled by a barbarian master ended with Romulus’ reign and the collapse of the Roman Empire of the West was complete. 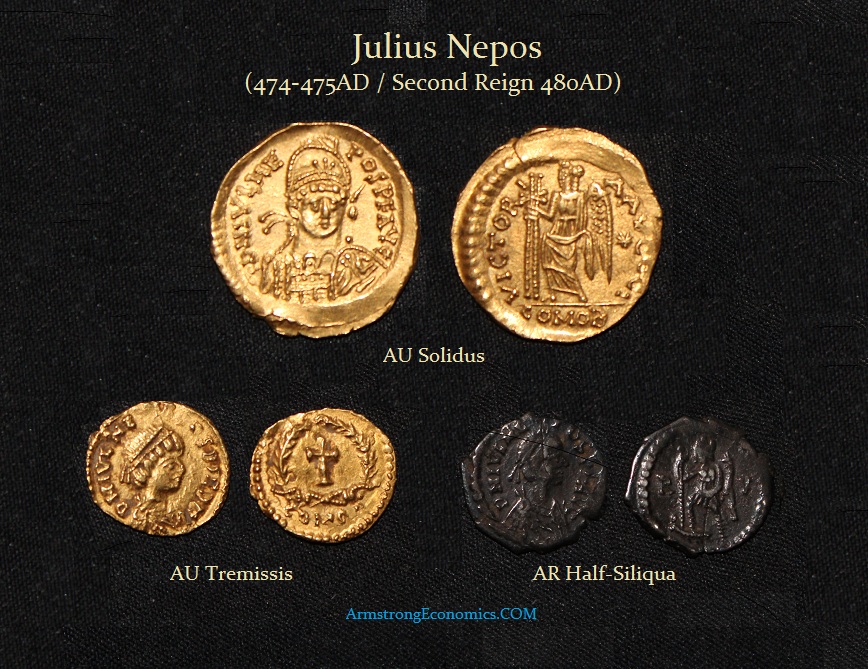