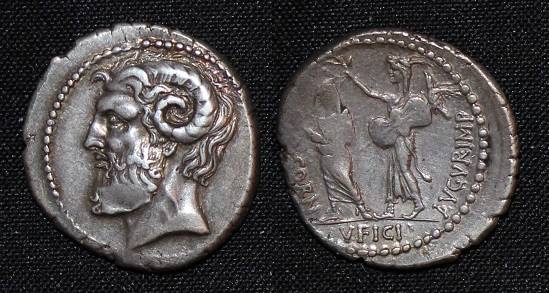 Lucius Cornificius was a loyal supporter of Octavian. He participated in prosecuting Brutus for the crime of Caesar‘s assassination. He then joined the forces gathered by Octavian during the the second Civil War. In 36 BC, Cornificius commanded a large force in Sicily and came under siege by the notorious Sextus Pompey. His situation grew increasingly desperate as Sextus Pompey caused his casualties to rise significantly while choking off his supply-line. Marcus Agrippa finally was sent by Octavian to clear the area from the presence of the pirate Sextus Pompey. Agrippa managed to arrive just in time to save Cornificius from what would have been sure defeat.

It was said of Cornificius that forever thereafter, he traveled to dinner on the back of an elephant in commemoration of his good fortune. In 35 BC, Octavian appointed Cornificius to the consulship, during which period he had the satisfaction of witnessing Sextus Pompey’s execution. Cornificius also held a successful proconsulship in Africa.