Lucius Julius Aurelius Setptimius Vaballathus (sometimes called Athenodorus) was the son of the ambitious Zenobia born in 259AD. He became joint ruler of Palmyra with his mother following the assassination of Odenathus, his father. Gallienus refused to grant him the titles which had been conferred upon Odenathus, and Claudius II Gothicus maintained the same policy. Nonetheless, neither Gallienus nor Claudius were able to challenge the power of Zenobia in Palmyra.

Emperor Aurelian, however, did grant Vaballathus the titles he sought – Vir Clarissimus, Rex, Imperator, Dux Romanorum. Coinage was struck with Vaballathus on the reverse and Aurelian on the obverse of the Antoninianus.

Then in 271 AD, Zenobia took a bold step. She raised her son to the rank of Augustus which was an open challenge to the then Emperor Aurelian leaving the emperor little choice. On her own coinage, she too took the title of Augusta. Aurelian marched against Zenobia and her son.

The coinage produced between 270 and late 271 AD proudly displayed the portraits of Aurelian and Vaballathus. In 271 AD, Vaballathus was proclaimed Augustus and Aurelian had little choice but to march against the rival Emperor and his mother.

In the battle that followed, the Palmyrene Empire fell to Aurelian. Zenobia and Vaballathus were taken as captives to Rome. 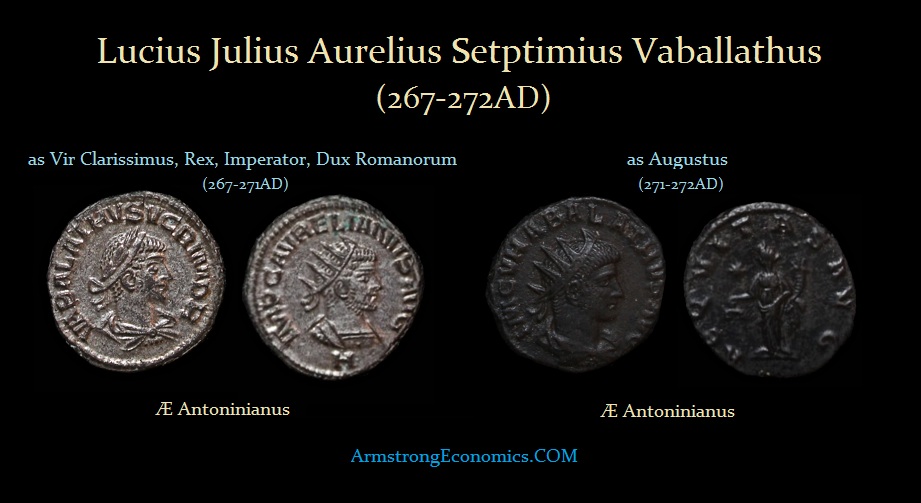