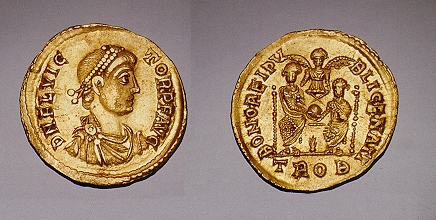 Flavius Victor was the son of Magnus Maximus. Shortly before his ill-fated invasion of Italy, Magnus Maximus proclaimed his young son, Flavius Victor, Augustus and nominal co-Emperor during the spring of 387 AD. The young boy was, apparently, left behind in Gaul when his father attacked Valentinian Il’s Italian possessions in the summer of 387 AD. Following Maximus’ defeat and execution, Victor fell into the hands ofTheodosius’ general Arbogastes and was himself put to death. His rare precious metal coinage is from the mints of Trier, Milan and Aquileia and his regular siliquae have the same reverse type as those of his father. 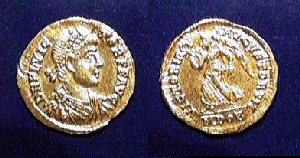