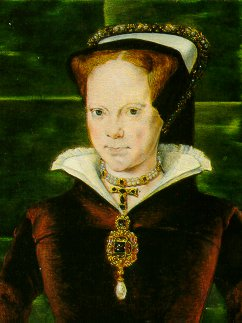 Mary was the eldest daughter of Henry VIII and his first queen, Catherine of Aragon, was born at Greenwich, in February, 1516. She was soon declared Princess of Wales, and was settled with a numerous household at Ludlow, where she was under the care of the Countess of Salisbury. Brought up in the Catholic faith, she took the part of her mother in the disputes respecting the divorce, and thereby estranged herself from her father. Many schemes for her marriage were projected, but they came to nothing. After the execution of the Queen, Anne Boleyn, in 1536, Mary was induced to acknowledge the king as head of the church in England, to confess that her mother’s marriage was unlawful, and to express her sorrow for her resistance to his laws; and was then restored to his favor. She yielded an outward conformity to the successive changes in religion during Henry’s reign, and the succession was secured to her by Act of Parliament passed in 1544.

During the reign of her brother, Edward VI, she steadily refused conformity to the Protestant religion, which led to the attempt to make Lady Jane Grey queen instead of her. This attempt failed, although Lady Jane was actually proclaimed on the death of Edward, July 6, 1553, and Mary entered London in triumph. She immediately set herself to the task of undoing the work of the preceding reign, and re-establishing the Catholic faith. She liberated the imprisoned Catholic bishops, imprisoned Cranmer, Latimer, and other leading Protestants, had Lady Jane Grey and her husband put to death on the charge of treason, and on the instigation of Gardiner procured the repeal of all the laws of Henry VIII and Edward VI. respecting religion. An insurrection which was provoked by the proposal of her marriage with Philip of Spain, and was headed by Sir Thomas Wyatt, was immediately suppressed, and the marriage took place at Winchester, in July, 1554. Her chief advisers were Cardinal Pole and Bishop Gardiner, and the rest of her reign is filled with the relentless persecution of the adherents of reform. The number of victims is variously estimated, but at the lowest it was about three hundred. Bonner, Bishop of London, especially distinguished himself as a promoter of this persecution.

In 1557 war was renewed between France and Spain, and Mary took part with Spain; losing soon after the town of Calais, a blow felt as keenly by the queen as by the nation. Worn out with bodily and mental suffering, Mary died, November 17, 1558, and was buried in Westminster Abbey. The popular estimate of Queen Mary is expressed by the epithet ‘Bloody;‘ but while the fitness of the term to characterize her reign is acknowledged, it is necessary, if we would be just, to consider many things besides the fact of her persecutions, and to make large allowance for her. She must at least be credited with sincerity in her attachment to the faith of her mother; and in her endeavour to establish it by persecuting its enemies, she shared the spirit and followed the example of all dominant churches of the age. With Queen Mary the last hope of a triumph of Romanism in England died out. 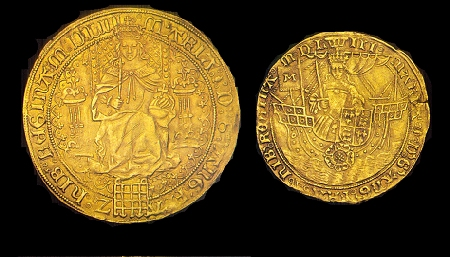