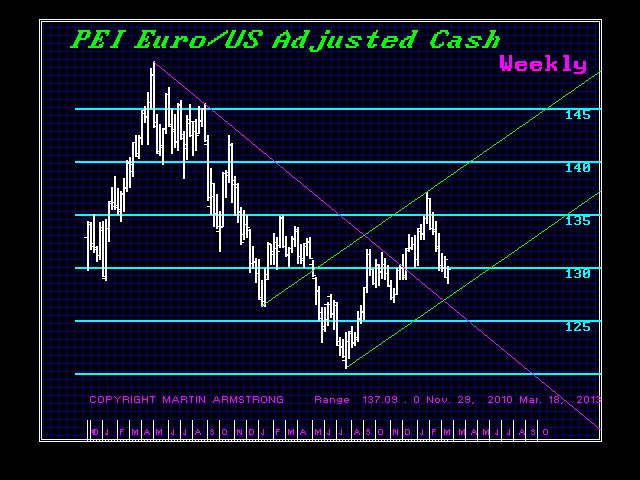 We are on the verge of a real crack in the Euro. So far the intraday low is 128.27 on the spot and we have a Weekly Bearish Reversal at 128.24 with a GAP down to 121.37.  As always, the political forces and academic factions are unfamiliar with how markets move. We are on the precipice of the demise of the Euro and this Cyprus event is much more serious than anyone suspects. The Euro can easily collapse and then a tidal wave of capital flows can swamp the dollar pushing it up to heights most do not think is even possible. This will put pressure on all the countless loans around the world that have been written in dollars under the pretense it is cheap. The ramifications of this crisis go far beyond Cyprus, Russian Oligarchs, and the German Elections.

Cyprus will most likely struggle to remain in the Euro and the sad part is that such a decision is likely to backfire on a grand scale. The assumption underlying this decision is that the Euro will survive and the fault lies with the banks. Antreas Artemis chairman of Cyprus’s biggest bank, the Bank of Cyprus, resigned abruptly today following a confrontation with the head of the central bank and the Finance Ministry. Artemis complained that authorities rode roughshod over him and his board of directors moving unilaterally to sell off units of the bank in Greece and planning to hit big depositors to pay for losses. This is the European solution inspired purely by the German elections with no forethought or understanding what they are doing. What was done to the Bank of Cyprus is part of the latest bailout deal negotiated between Cypriot officials and the so-called troika of international lenders who are purportedly the European Commission, the European Central Bank, and the International Monetary Fund.

This is all about the elections and politicians refusing to do the right thing. The Euro cannot be saved in this manner and the longer these economies try to cling to a faulty structured design, the worse this meltdown will be. This Euro-Crisis is by no means going to end. The ECB and Europe is showing depositors everywhere their solution, confiscation of accounts to cover-up their own incompetency. The damage has been done. The global stock markets gave up early gains Monday as new anxiety about the supposed sanctity of euro zone bank deposits is called into question.

Mr. Artemis’s resignation following the controversial decision by international lenders to impose significant losses on the bank’s larger depositors, still caught the market by surprise. This is a crisis still unfolding and will ensure a volatile and uncertain future while destroying the economic prospects for Cyprus and ending its financial system forever. This illustrates that the private sector is not even being consulted. Here, Cyprus’ largest bank had been left entirely out of any discussion process. This illustrates that government is incapable of managing the economy and Brussels went as far as to name an outside administrator to oversee the bank in the coming months to enforce the asset confiscation.

Cyprus’ banks did not meet the promised deadline to reopen by Tuesday. The Bank of Cyprus and Cyprus Popular Bank, which are the nation’s largest financial institutions holding the bulk of deposits on the island, will now remained closed at least through Thursday in a pathetic attempt to reduce the risk of a bank run by nervous depositors. Automated cash withdrawals will be limited to €100 a day.

The Cyprus’ faltering bank system suffered a new blow on Tuesday, as Fitch Ratings said it was cutting its credit grades on Cypriot banks because of the losses imposed by the bailout deal on senior creditors. Fitch said it was cutting its rating on Cyprus Popular Bank, known as Laiki Bank, to “default.” They also cut its rating on Bank of Cyprus to “restricted default,” a grade Fitch said means the bank has experienced a payment default on a bond, loan, or other material obligation yet has not moved into liquidation or ceased operating. This is all at the direction of Brussels and Merkel.

Laiki’s assets are being split into a so-called bad bank while performing assets are being transferred to Bank of Cyprus. This will be part of the recapitalization by converting uninsured depositors’ claims into equity. Piraeus Bank of Greece acquired the Greek operations of three Cypriot lenders, Bank of Cyprus, Laiki Bank, and Hellenic Bank — for about €524 million. Piraeus claims those off-shore deposits will not be subject to the confiscation impose upon Cypriot depositors. This is an attempt to prevent a contagion in Greece by securing the stability of the Greek banking system. Nonetheless, in Greece newspaper headlines continued to lash out at Germany and Northern Europe for their tough stance in negotiations. Brussels and Germany cannot see the error of their ways and how their refusal to restructure the Eurozone is destroying everything the Euro was intended to create. Greece is now bracing for the return of troika inspectors next week to look at its books.

Once this confiscation in Cyprus has taken place, this will be the model here on out for the Eurozone. We are looking at the DEMISE of Europe. Nevertheless, the European Central Bank has publically stated through an official that the case of Cyprus, in which large depositors and senior debtholders were forced to take losses, would NOT serve as a model for any future bailouts in the Eurozone. Then is this purely a solution because of large Russian deposits? The Cyprus bailout “was the solution to a problem that had become desperate,” said Benoît Coeuré, a Frenchman and a member of the E.C.B.’s governing council who spoke on Europe 1 radio. “Cyprus was in bankruptcy, that is something that doesn’t exist anywhere else in the Eurozone.”  Indeed, the entire Eurozone is bankrupt for nobody ever pays off debt. Who are we fooling?  Coeuré continued: “The situation was so unique that it needed a unique solution.” He then said “I don’t see any reason to employ the same methods elsewhere.” The head of the Eurogroup of Eurozone finance chief, Jeroen Dijsselbloem, suggested on Monday that the Cyprus model might be used as a “template” any for future bailouts. At least he told the truth. He was then forced to claim he misspoke. Watch the next crisis before the German elections will produce the same result.

This could have been avoided with just €10 billion ($13 billion),where the ECB poured hundreds of billions into Spanish banks. Accounts up to €100,000 will be protected hoping that will be the bulk of the people buying them off while the estimates of the uninsured depositors with larger accounts could face losses of up to 40 percent loss. They cannot see that their bullshit will not stem the collapse in confidence throughout Europe.

Meanwhile, the Cyprus Finance Minister Michael Sarris sought to dismiss calls for Cyprus to exit the euro to ease the economic pain inflicted by the Brussels and Germany. The only way to save the economy in Cyprus is to exit the Euro, but remain within the EU as is the current case for Europe. Any political decision otherwise is a statement that they somehow think the Euro can actually survive this mess. The euro design is fatally flawed and the real risk is that it will take all member states down with the ship.

The restrictions on money transfers probably won’t be loosened for weeks or even months. The fallout continues to unfold not just in Cyprus but we must watch now all of Europe for the risk of a contagion is now exponentially higher. Controls on capital movements to prevent money from draining out of the banking system are likely in Cyprus and that is allowed in exceptional

circumstances under European Union law. This means, the ECB could restrict any movement of capital out of Europe and that could renew the risk for a strong Swiss and the US dollar. Those who have been buying the German debt assuming the breakup of the Euro will give them Deutsche marks had better just get out of town.

Cyprus’s 18 billion-euro economy is the third smallest in the 17-nation euro area. Before the bailout, the European Commission predicted a contraction of 3.5 percent in 2013. However, we are looking at a collapse in the Cypriot economy that could reach the 50% level. Cyprus faces a deep depression with many businesses collapsing as funding vanishes.

IMF head Christine Lagarde said the bailout deal agreed was “a comprehensive and credible plan” to help restore trust in the banking system. I do not think that such people have any place in the economy as a decision maker. This is a complete disaster. The US dollar will eventually be pushed much higher as capital starts to flee Europe as a whole. This will put pressure on the US economy and reduce its growth making the entire future very bleak when the ECM turns in 2015.75. 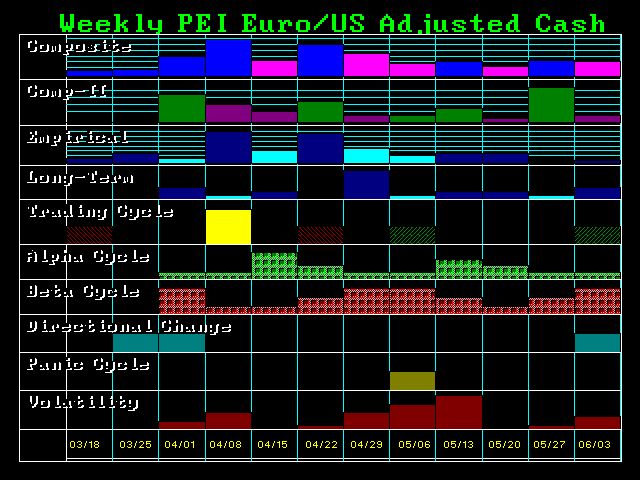 It will be catastrophic for Cyprus to remain within the Euro after this. They are destroying ALL confidence within its economy and money is already being diverted around the world. Cyprus’ days as a banking center are over. That had a lot to do with why Brussels wanted that to come to an end in any event. The Euro has collapsed from 137.10 on February 1st  to a new intraday low today at 128.27. April and May just look nuts. This is not going to go away. Our Weekly Bearish Reversal is 128.24 on the spot. If this gives way, the Euro will move to test the real critical long-term support that begins at 121.37 and extends down to 118.00 After that, the Euro will make new historic lows driving the dollar crazy.