Whenever government gets involved with the value of a currency, trouble begins. You cannot flat-line a currency while everything else floats. The Europe is in trouble and separatists movements are popping up in a lot of places because the Euro was created in a half-ass manner trying to create a single currency with multiple autonomous debts.

The reason Princeton Economics became the largest currency adviser in the world with more than half the size of the US National Debt under contract, was simple. Politicians post WWII used currency as the proof of their reestablishment policies. It became in Europe – “See the currency is up because I did a good job.” When I ask a friend at a major Swiss bank what name should I adopt for our first office in Europe, he asked me to name a European analyst. I was embarrassed because I could not. He then explained that the reason everyone used Princeton was because the European analysts were always bullish their own currency. He said, only Americans didn’t care about their currency value. In the 1007 Crisis, Latvia jailed up any economist that said down although briefly until they thought how that looked.

The politicians (Silver Democrats) wanted easy money. They overvalued silver at 16:1 to gold and flooded the economy with silver dollars. Gold fled the USA and silver poured in and the US was virtually bankrupt by 1896 when J.P. Morgan had to lend the country gold. History repeats when it comes to the collapse of standards because the people in charge just can’t stop manipulating shit for their own political self-interests. Bretton Woods gold standard collapsed because the fixed the price of gold yet did not limit the supply of dollars. Hello? Can you really get more stupid than that? 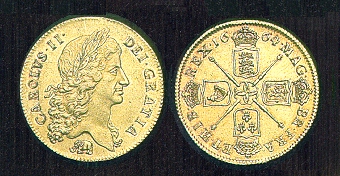 In Britain during 1663, a new gold coinage was introduced based on the 22 carat fine guinea. It was fixed in weight at 44½ to the troy pound. Despite what the Goldbugs claim, this was not a gold standard for from 1670 onward, this coin’s value varied considerably until 1717, when it was fixed at 21 shillings (21/-, 1.05 pounds) establishing then a GOLD STANDARD with fixed value (the real definition of a gold standard concerns the fixed valuation not the fact that gold is used in exchange).

However, despite the efforts of Sir Isaac Newton to reduce the value of the guinea, who was Master of the Mint, this gold standard valuation overvalued gold relative to silver throughout continental Europe precisely as the Silver Democrats did in the USA during the 19th century. Why? In both cases, politicians yielded to special interests. In Britain they discovered gold and wanted to create more money so they overvalued it relative to silver. In the case of America, they discovered mountains of silver and overvalued that relative to gold to create more money. So standards are not standards at all! They are historically based NOT upon TANGIBLE value – but political self-interests.

In the case of Britain, merchants sent silver abroad in payments where it bought more while goods for exports to Europe were paid for with gold to save money because the Brits overvalued gold relative to Europe. As a consequence, silver flowed out of the country and gold flowed in. This created a situation where because Great Britain was effectively on a gold standard, what emerged was a massive chronic shortage of silver coins.

This shortage of silver then affected trade with Asia. Silver was the only commodity accepted by China for exporting goods during this period. China did not accept gold. China received more than 28 million kilograms (62 million pounds) of silver in trade during the mid-17th century.

Those that preach standards and pegs should pick up the rug and look a bit deeper. You will find that they are always manipulated, never a TANGIBLE standard based upon economics, and impossible to maintain because everything else around the “fixed” value floats. There is a difference from using gold as a tangible store of value as it is today and a system where it fixes its value preventing it from rising or falling we call the gold standard. Only a floating system functions with the least political interference.